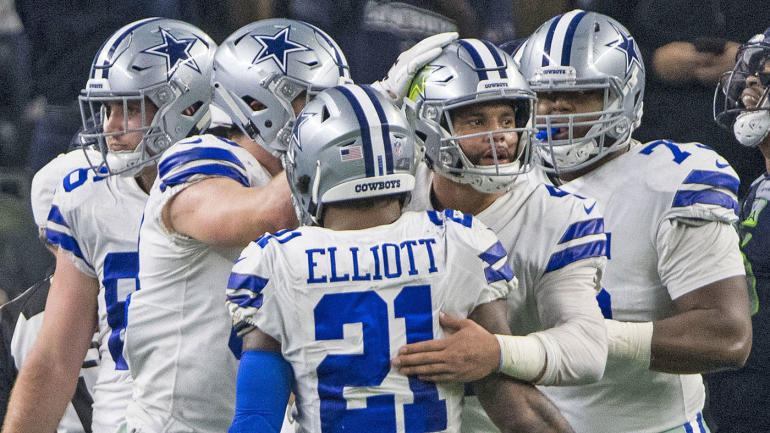 In the NFL playoffs, your next opponent often comes down to the luck of the draw and that’s exactly why the Los Angeles Rams will be hosting the Dallas Cowboys on Saturday.

This is a game that almost didn’t happen. If Bears kicker Cody Parkey had been able to knock through a 43-yard field goal against the Eagles on Sunday, then the Cowboys would be headed for New Orleans this weekend and the Bears would have been playing the Rams. Instead, Parkey’s kick was knocked off course by an Eagles player, sending the Bears out of the playoffs and the Cowboys to Los Angeles.

Somehow, the luck of the draw always seems to bring these two teams together in the postseason. This Saturday’s game will mark the ninth time in NFL history that the Rams and Cowboys have met in the playoffs, which is notable, because no two teams have met more.

Although they haven’t played each other in the playoffs since 1985, these two teams have more postseason meetings than more glamorous rivalries like 49ers-Giants and Cowboys-Packers, which have both happened seven times in NFL playoff history.

The all-time playoff series between these two teams is tied 4-4 and the team that breaks the tie on Saturday will be getting a nice prize: A trip to the NFC Championship game. If the Cowboys pull off the upset, they’ll be headed to their first NFC title game since January 1996. If the Rams can pick up their first playoff win under Sean McVay, they’ll be headed to the NFC Championship for the first time since January 2002.

Although the Cowboys should be at nearly full strength when they take the field in L.A., there are two injuries to keep an eye on. Wide receiver Cole Beasley has been dealing with an ankle injury all season and he got even more banged up during the Cowboys’ win over Seattle on Saturday. There’s no guarantee that Beasley will play and Jason Garrett has said that it will on come down to how Beasley feels as the week goes on. Another player dealing with an ankle injury is left guard Xavier Su’a-Filo, who didn’t play against the Seahawks. Luckily for the Cowboys, it sounds like he’s likely going to be on the field. Garrett said this week that he’s “optimistic” that Su’a-Filo will play against the Rams, which would definitely be good news for a Cowboys offensive line that will be going up against Aaron Donald and Ndamukong Suh.

Rams: One of the biggest storylines in this game for the Rams will be the health of Todd Gurley. After sitting out the final two games of the regular season due to a knee injury, Gurley is expected to be on the field against the Cowboys, but it’s not clear if he’ll be 100 percent. Although C.J. Anderson filled in admirably while Gurley was out, averaging 149.5 yards per game, those two performances came against the Cardinals and 49ers, two teams that aren’t nearly as good as the Cowboys when it comes to stopping the run. Not only did the Cowboys rank fifth in the NFL against the run in 2018, but they also completely shut down a Seahawks ground attack that finished the season as the league’s top rushing team. The Rams are likely going to need a big game from Gurley if they want to advance.

What needs to happen

Cowboys: The Cowboys offensive game plan on Saturday basically boils down to two words: Feed Zeke. If the Cowboys are going to pull off the upset in Los Angeles, they’re going to need a big game from Ezekiel Elliott. The good news for the Cowboys is that if there’s one team they should be able to run all over, it’s the Rams. Although Aaron Donald led the NFL in sacks this year with 20.5, that didn’t really help the Rams when it came to stopping the run. During the regular season, the Rams surrendered 5.1 yards per carry, which was the worst performance by any defense in the NFL in 2018. When going up against a defense like that, Elliott is basically the perfect weapon to have. Not only did the Cowboys running back lead the NFL in rush yards (1,434), but he also averaged 4.7 yards per carry during the regular season. In the Cowboys wild-card win over the Seahawks, Elliott totaled 169 yards and a touchdown (137 yards and a touchdown on the ground, 32 yards through the air).

Rams: The Rams need Jared Goff to get off to a hot start so he doesn’t lose any confidence. Although the Rams lit up the scoreboard during the final two weeks of the season by scoring 48 and 31 points, those games came against bad teams in the 49ers and Cardinals. In the two weeks before that, the Rams played two playoff teams — the Bears and Eagles — and Goff struggled big time, throwing five interceptions and zero touchdowns in two games that the Rams ended up losing. Goff also struggled in his only playoff appearance last season, a game the Rams lost to the Falcons 26-13. The Rams were limited to just 13 points against the Falcons after leading the NFL in scoring in 2017, and a big reason for that was because Goff never got on track. Aaron Donald and Todd Gurley are important players for the Rams, but they can still win if either of those guys has an off day. However, the Rams have almost no chance of winning if Goff has an ugly game.

The Rams have one glaring weakness this year — stopping the run — and unfortunately for L.A., the Cowboys are the one team left in the playoffs that’s perfectly built to exploit that weakness. Ezekiel Elliott is probably licking his chops at the thought of going up against the Rams defense and it won’t be surprising at all if he has a huge night with 150 rushing yards or more. If the Rams can jump out to a big early lead, they might be able to get the Cowboys away from their ground game, but that won’t be easy. The guess here: Zeke runs wild as the Cowboys pull off the upset win.