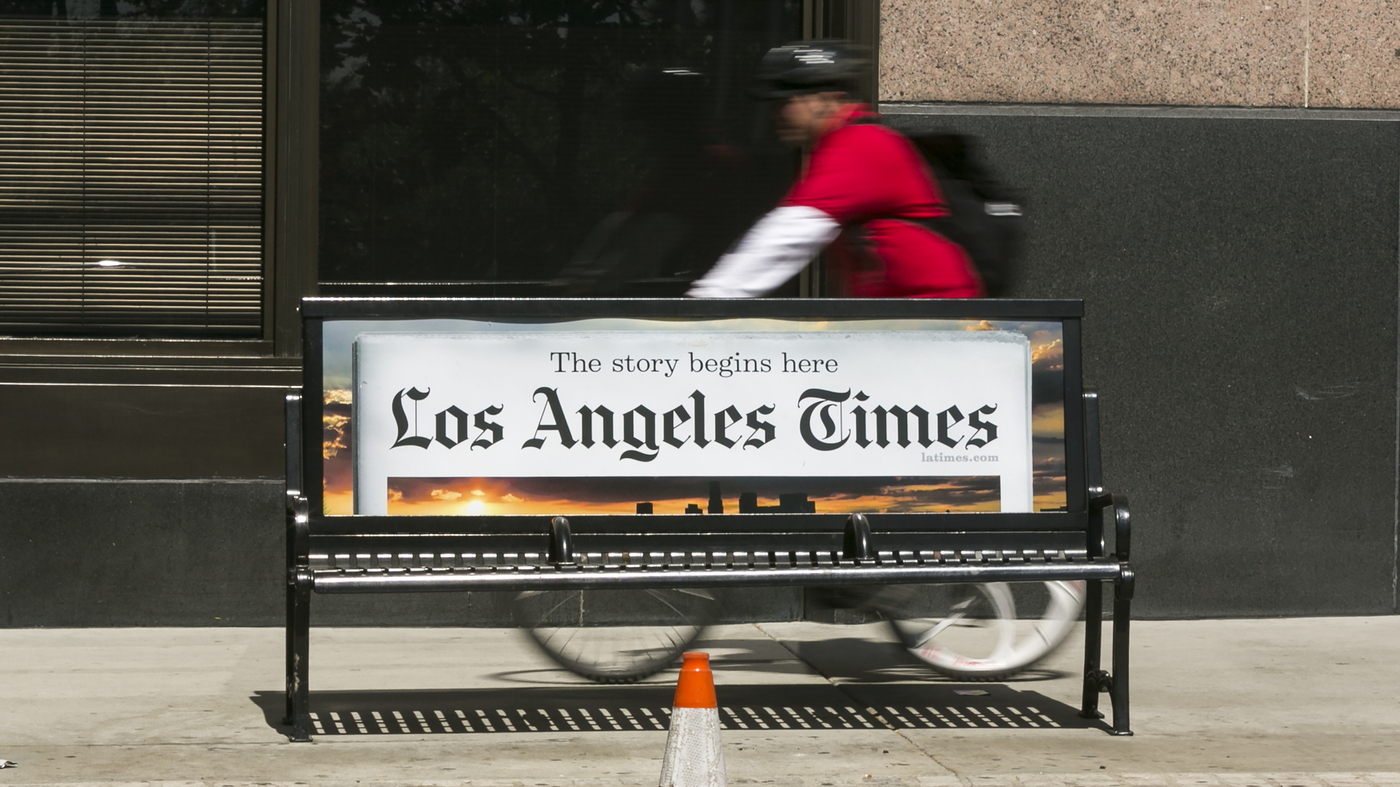 A cyclist rides on the sidewalk past the Los Angeles Times building in downtown Los Angeles. The paper’s Saturday deliveries were affected by an interference with Tribune Publishing’s print production systems.

A cyclist rides on the sidewalk past the Los Angeles Times building in downtown Los Angeles. The paper’s Saturday deliveries were affected by an interference with Tribune Publishing’s print production systems.

Jeff Light, editor and publisher of the San Diego Union-Tribune, began Saturday morning by issuing an apology. “Most Union-Tribune subscribers were without a newspaper this morning as a computer virus infected the company’s business systems and hobbled the ability to publish,” Light wrote.

Marisa Kollias, spokesperson for Tribune Publishing, wrote in a statement to NPR’s David Folkenflik: “On Friday, some of the print production systems at Tribune Publishing were interfered with, causing a delay in our production schedule.” Kollias said no personal data of subscribers, online users or advertising clients was compromised as a result of the interference, and news and all regular features are available online.

Phone lines for the Los Angeles Times were jammed Saturday morning, as many subscribers to that paper also woke up without their physical copy. The paper’s main Twitter account has been responding to individual complaints with phrases like, “We’ve had a ton of delivery problems today which is why our lines are busy” and “You’re right! We have had big issues with delivery today and we apologize.” The Los Angeles Times, like the Union-Tribune, used to be owned by Tribune Publishing and still uses some of its systems.

Hillary Manning, spokesperson for The Los Angeles Times, wrote in an email to NPR:

“A computer virus infected the business systems associated with the printing process. This has caused delayed and incomplete printing of the Los Angeles Times, San Diego Union-Tribune and other publications which are printed at our facility. As a result, many home-delivery customers experienced delayed deliveries this morning, and some customers may not have received their paper.”

Manning said it is likely that Sunday paper delivery will be affected as well.

Light says production of the Wall Street Journal and New York Times was also affected as a result of Saturday’s delays at the Olympic Printing Plant in L.A. NPR has reached out to both for comment but has not yet heard back.

According to reporting from The Los Angeles Times, the company believes the production of other newspapers may also be affected but has yet to confirm details.