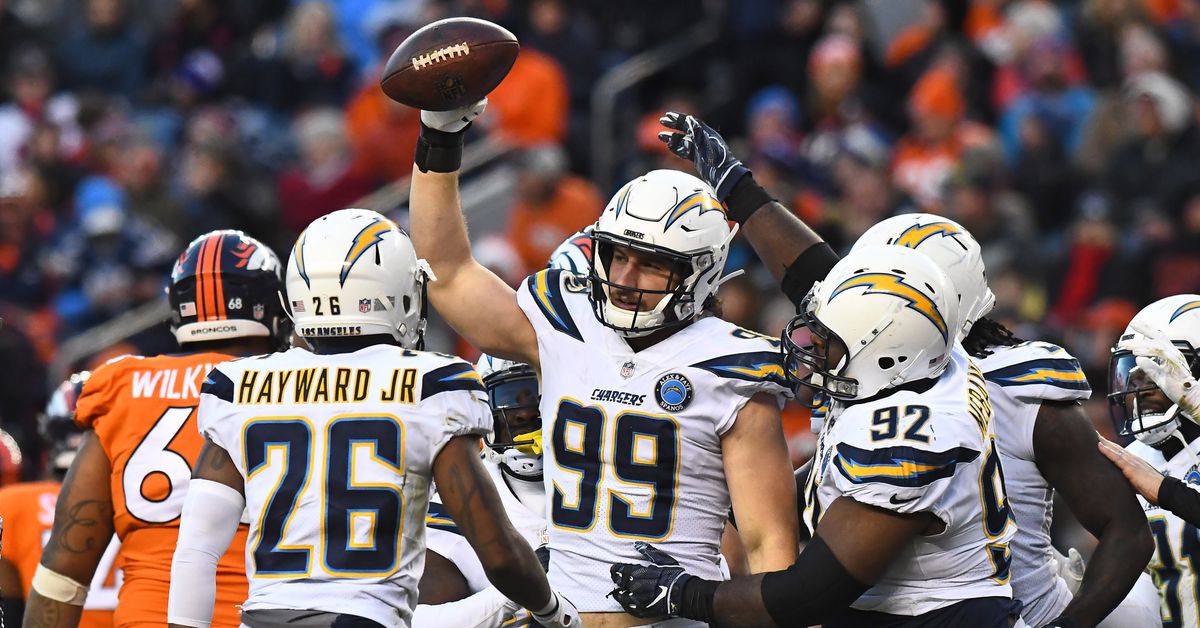 The Los Angeles Chargers received the opening kick off and for a moment it looked like things were going to go their way as they were gifted a 1st down by the defense on the second play from scrimmage. Unfortunately, three plays later Philip Rivers lofted an errant pass that was intercepted by Isaac Yiadom.

Neither offense came to play, though, and two Broncos punts sandwiched a Chargers punt before the Chargers took over on offense again. Tyrell Williams injected some life into the offense with a 17-yard catch and run. Mike Williams followd that with a 14-yard reception. Things once again appeared to be trending in the right way only for Rivers to throw another ugly pass that was picked off by Willie Parks.

The teams then traded two punts a piece. Case Keenum and the Broncos offense took over from their one 20-yard line and started to put together a drive. A 5-yard carry from Royce Freeman was followed by a 10-yard reception by Andy Janovich. A holding penalty looked to derail them, but three plays later they had a new set of downs. That’s where the wheels came off, though. Back-to-back holding penalties by Garrett Bolles created a 1st & 30. Trying to play it safe, Keenum looked to dump the ball off, but it was a backward pass that his receiver was unable to handle and Kyle Emanuel scooped it up and scored a touchdown.

When the Broncos got the ball back, they proceeded to move the ball down the field. River Cracraft hauled in a 44-yard pass to set up a 1st & goal from the 6. Two incomplete passes were followed by a Jahleel Addae interception that had a chance to put the Chargers firmly in control of the game, but for some unknown reason Addae pitched the ball toward a teammate who was looking to throw a block and ended up giving the ball right back to Denver.

The defense continued to stay strong and held the Broncos offense to a field goal attempt which they converted before the half ended.

The Broncos offense got the ball to start the second half and despite a 21-yard play to Tim Patrick, they still ended up punting the ball away from midfield.

Starting from their own 11, the Chargers got Benjamin involved with an endaround that he turned into a new set of downs. Holding called on Virgil Green wiped out an impressive 19-yard run by Gordon, but Mike Williams moved the sticks with a terrific catch on 3rd down. With things going well, Ken Whisenhunt dialed up that terrible reverse call he likes so much and the drive was dead following an 11-yard loss on the play. Donnie Jones punted the ball back to Denver.

Two plays into the Broncos’ drive, Adrian Phillips ripped the ball away from Patrick and it landed in Joey Bosa’s hands to give possession back to the Chargers. Rivers and co. only needed four plays to cover the 16 needed yards for a touchdown. Mike Williams capped the drive off by getting wide open in the end zone for six points.

After the touchdown, both teams traded punts again with both drives featuring botched snaps.

A 25-yard pass to Courtland Sutton quickly put the Broncos in Chargers’ territory. A few plays later, a 20-yard reception by the full back was six points. Down 5 following the score, Vance Joseph elected to go for 2. Keenum tried to go to Sutton, but Hayward picked him off, broke a tackle from Sutton and raced the full length of the field for 2 points.

After a touchback, the Chargers offense took the field and methodically marched 75 yards for a touchdown. The drive featured a 41-yard run by Ekeler, a 21-yard catch by Allen, and perhaps the most impressive contested catch of Mike Williams’ young career. Ekeler was the one who put the points on the board with a 1-yard run. Melvin Gordon also appeared to suffer an ankle injury on the drive.

On the kick off, Desmond King punched the ball out along the sideline and the ball died just short of the boundary to allow the Chargers to recover it.

And then it was Geno Time with 5:40 left in the game. Geno Time was… not great. Geno Smith almost immediately fumbled the ball away while trying to throw on the run. It was ugly to watch. The defense was then forced to take the field again. The Broncos offense continued to be ineffective, though, and they eventually turned the ball over on downs.

Smith and the offense then came back on to try to run out the clock.