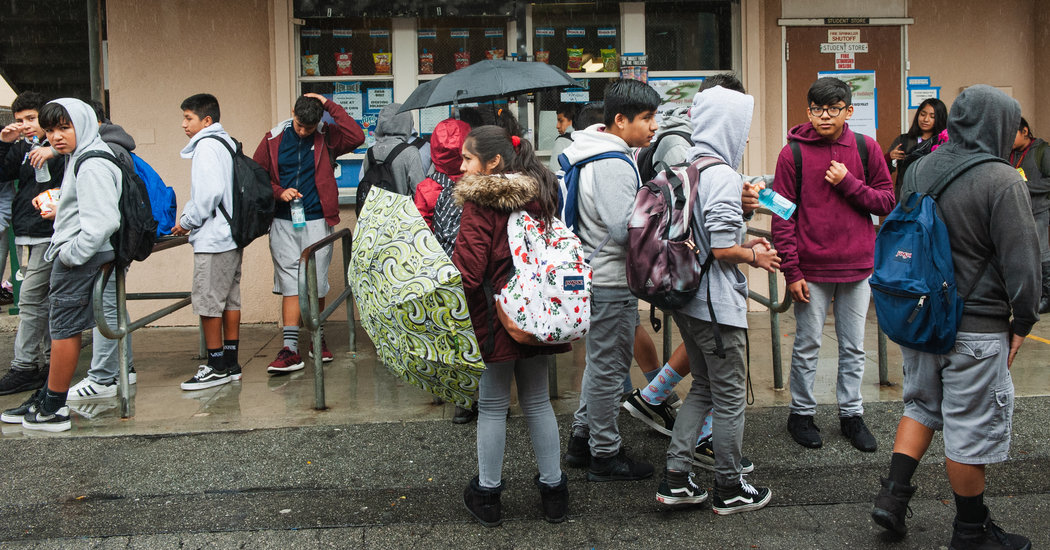 Their children were a few of the hundreds who poured into Virgil Middle School on Thursday morning, the fourth day of a massive teachers’ strike in the nation’s second-largest school district. Their families could not pay for child care and were too worried to leave students at home alone. Just a few miles away, in a well-off Silver Lake elementary school, there were fewer than a dozen students in attendance; most parents could afford to keep their children out of school.

“What choice do I have, this is the best place for her to be,” Ms. Aguilar said. “I hope, I pray, the teachers get what they want and come back soon.”

After more than a year of protracted negotiations, the district’s 30,000 public schoolteachers walked out demanding higher pay, smaller class sizes and more support staff for students. But the union is also using the strike as a way to draw attention to what it sees as the growing problem of charter schools, saying that they siphon off students and money from traditional public schools.

Part of the issue here is school finances: Though California is one of the richest states in the country, it also has the highest poverty rate in the nation, when cost of living is factored in. And though it is a bastion of liberal policies, its urban public school systems are the most hurt by the state’s limits on how much money can be raised in property tax.

As in many urban school districts, the overwhelming majority of students in Los Angeles public schools are poor — more than 80 percent qualify for free or reduced price lunch. Los Angeles’s sizable wealthy population has for decades largely chosen to send its children to private schools or to nearby cities, like Beverly Hills or Culver City, with higher performing schools.

For generations, California has spent less on public schools than many other states, despite Democratic control and an influential state teachers’ union. Even now, with a $209 billion state budget with record-high reserves, the state spent about half as much as New York did on the average student in 2016, the last year for which federal comparisons were available. After decades of funding shortages, educators say that Los Angeles and other urban schools need far more than what they currently have to educate some of the neediest students in the country.

About one-fifth of students in the Los Angeles district are learning English and roughly 15 percent need special education services. The district is also highly segregated: Latinos account for roughly 75 percent of all students; about 7 percent are white and about 8 percent are African-American. Class sizes in the district often top 40 students, well above the national average for urban schools, which ranges between 16 and 28. Teachers say large classes are particularly challenging in schools with high-needs students.

This week, just a fraction of the district’s half a million students have shown up to schools; on Thursday, roughly 84,000 students were in attendance. But district officials say that schools with a larger proportion of the neediest students have had higher attendance rates.

The chronic funding shortage for California’s large urban school systems is primarily because of the state’s property tax law. Voters passed Proposition 13 in 1978, capping property taxes and drastically limiting the amount of money the state could collect for public schools. The law has led to smaller, more affluent communities raising money with local bonds or parcel taxes, something that is virtually impossible in poorer urban districts like Los Angeles.

But despite widespread agreement from education experts that the law harms low-income schools, it is widely seen as a third rail of state politics and changing it would require statewide voter approval. There is now an effort, supported by both district and union leaders in Los Angeles, for a 2020 ballot measure that would change the law to increase commercial property taxes, but not change the law for homeowners.

Still, Democratic leaders are facing pressure to find significantly more money for public schools. The scrutiny is now turning to Mayor Eric Garcetti and Gov. Gavin Newsom. Austin Beutner, the superintendent of the Los Angeles Unified School District, has suggested that the mayor use some of the city’s budget to help pay for student services. And many observers say that an agreement between the union and the district will ultimately require more money from Mr. Newsom’s budget.

Although the union and Mr. Beutner agreed that the state should spend more on public schools, they are locked in a bitter fight over how the district should use the money it already has — and cannot agree on how much that is.

The union has pointed to a nearly $2 billion reserve, which it says could be used to pay for more educators so that class sizes are significantly smaller and that all schools have full-time nurses, counselors and mental health professionals. But Mr. Beutner has said the district is already spending far more than it brings in. A state-appointed fact-finder supported both claims, and both sides have pointed to the report to bolster their arguments.

Mr. Beutner has been steadfast in his support for charters, saying they give parents more choices and are an essential option in Los Angeles. But Mr. Beutner has pushed back at the union’s claim that he wants to shutdown traditional public schools.

Mr. Garcetti has said he supports the teachers; on the first day of the strike, he said he was “immensely proud of Los Angeles’s teachers today for standing up for what I believe is a righteous cause.” But the mayor has also embraced his role as mediator between the union and district. On Thursday, Mr. Beutner and Alex Caputo-Pearl, the president of the union, met face-to-face for the first time in nearly 10 days, but negotiations appeared to remain at an impasse.

In contrast, the Los Angeles strike has been organized by a strong union against its bosses: the superintendent and the Board of Education. At the city and state level, union allies sit in many of the key political seats that make decisions on education. In Sacramento, Democrats hold a new supermajority in the State Legislature.

In many ways, this is a moment of strength for the California teachers’ unions, which have won a series of electoral victories against Democratic critics who support the expansion of charter schools, which are generally not unionized. (One of the small charter school groups with a union also went on strike this week.)

Virgil began sharing its campus with a charter school two years ago, a decision that came from the district despite protests from parents and teachers. Though there were fears that Citizens of the World Charter School Silver Lake would siphon off enrollment from Virgil, that has not happened. Instead, Virgil’s principal, William Gurr, said the school is “bursting at the seams.”

The populations of the two schools are markedly different. While nearly all students at Virgil qualify for free or reduced price lunch, the same is true for just 15 percent of students at Citizens of the World.

Though he supports charter schools, Mr. Gurr says he is still frustrated when he sees that the charter he shares a campus with has far more space.

He has gone to great lengths to find ways to pay for many of the things the union is demanding for all schools: a nurse, a social worker and academic counselors. “These are things that enable the students to learn on a normal school day,” he said.

This week, more than 220 of Virgil’s seventh graders gathered in the auditorium for geometry with Linda Lee, one of the assistant principals. Though Dr. Lee was prepared, with a movie-theater-size screen to display the lesson and a booming microphone, it was impossible to keep the students quiet for the nearly 90-minute period.

“Miss, Miss, Miss,” one student shouted, as he struggled to hear Dr. Lee.

As she sat near the back of the auditorium, Angie Hernandez, 13, found it hard to focus over the din of chattering students. But in some ways, it did not feel all that different than her usual classes, which have often swelled to 40 and are sometimes so crowded that there are not enough desks for students.

“It’s challenging for sure,” she said.