Amazon (AMZN) profits have skyrocketed in 2018. That growth came mainly from improvements in e-commerce profitability. The stock price joined the ride and went to its all-time high, above $2,000. Then, it followed the market on the way down. However, even after the correction, Amazon still trades above 80 times projected earnings. The forward PE above 60 also seems overly optimistic, neglecting the cracks in this story. 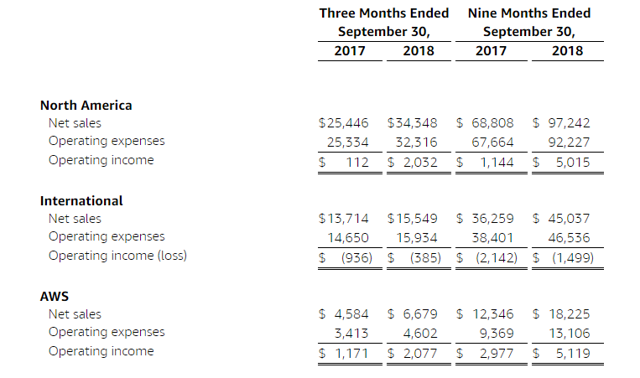 Several analysts have noted Amazon’s fierce retail practices. Several brands that sell on Amazon have revolted against pricing policies adopted by the company. These aggressive pricing strategies, several times, end up putting the brands in a collision course with traditional retailers.

Stories about price cuts well beyond what is commercially viable, compromising the pricing for specialty resellers, are common. The script is well-known, the crisis starts when Amazon demands lower prices from the brand, and the specialty retailers revolt and boycott the brand’s products because their wholesale price can’t match Amazon’s retail price. That leads to rapid revenue shrinkage for the brand and possible liquidity problems. To avoid losing even more sales, compliance with Amazon becomes mandatory and a self-fulfilling prophecy of death.

Now, we have to add two more ingredients. Not long ago, companies could still sell on Amazon through several resellers selling third-party items on the platform. Many companies have preferred this arrangement because, usually, these resellers were more cooperative than Amazon.

Private label is a new trick on Amazon’s book

That’s where the first ingredient comes to play. Amazon has started to block resellers with official deals with the brands from selling those products on the platform. Amazon argues that it has the right to have special conditions in sourcing the products from the brands. That means that only Amazon can source the targeted products. You can still find those in unaffiliated merchants, but they will not have a warranty or quality checks. Basically, Amazon is barring brands from selling directly to consumers through Amazon Marketplace, its platform for third-party sellers.

For many years, brands have come public, voicing their disgust against Amazon practices. That is especially true when Amazon picks a brand and starts playing with its retail price, starting an earthquake in the brand’s world.

That’s bad, but it gets worse with the second ingredient. If brands revolt, companies like eBay (NASDAQ:EBAY) might have a shot at grabbing Amazon’s dissident brands. However, Amazon seems to have an answer for that. The company has entered the private label game. In itself, it doesn’t mean much. It’s an old tactic in the retailer’s playbook. However, Amazon has tools that might be devastating for brands.

The data analytics that Amazon accesses provide them with critical insight about what people are buying the most. If you add the fact that Amazon has just entered the private label game, you can understand the threat that means for too many brands. For those thinking that is not significant, CNN Business quotes analysts estimating $7.5 billion in sales for 2018, possibly, growing to $25 billion in 2022. That means many billions worth of business lost by brands selling on Amazon.

All the data that Amazon collects and analyzes provides a great asset. It allows the company to specify better products and get into the price points where sales become a hit. That puts most brands in disadvantage. Needless to say, if a brand gets too successful, that will appear on Amazon’s analysis. And, it risks attracting competition from the online retailer.

Amazon can afford to experiment, by constantly tweaking its product strategies. Now, add the fact that Amazon can give preference to its own brands. 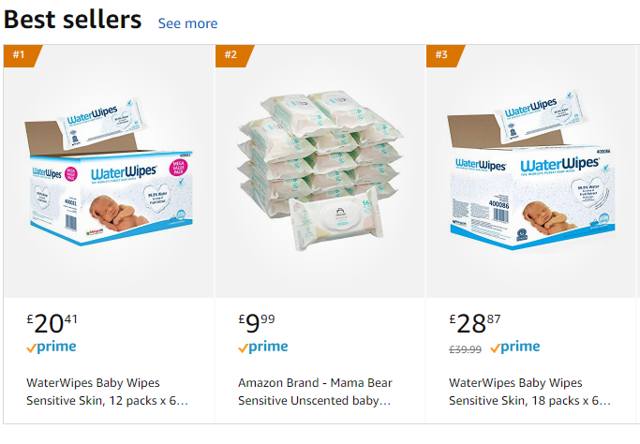 (Source: Taken from Amazon Website – And yes, Mama Bear is an Amazon brand undercutting the other 2 best sellers by at least 50%)

To drive the point home, let me just say that it is possible to counteract Amazon’s website product placement. It is one of Amazon’s fastest growing revenue stream. I am talking about advertising revenues, in part, coming from companies paying to get better placement on Amazon’s website. For Amazon, that is one of those tails I win heads you lose situation. 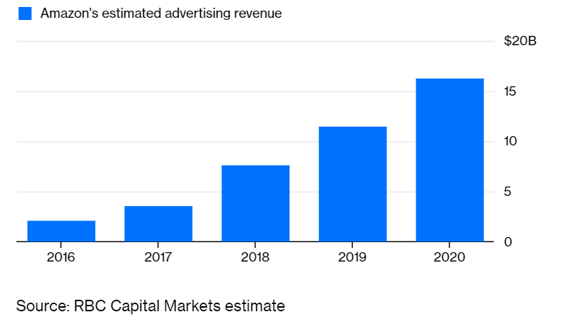 What does this mean to Amazon?

First of all, that’s the materialization of what many talking heads have been speculating about for years. Amazon is finally squeezing profitability out of its bargain power. And, the company is clearly stating that they want to sell products, doesn’t matter which brand it is. The relation with brands seems like a tense one. Amazon doesn’t seem to look to brands as partners. In the end, the truth is that the company is, finally, seriously trying to squeeze profitability out of their e-commerce business model. And, in what seems to be a zero-sum game, Amazon appears determined in transferring brands’ margins to their own.

The problem with this approach lies in the fact that it dissuades the brands from selling on Amazon. True that Amazon is now proving that it may not need some of the brands, but that approach seems unsustainable. If a syndicate of big powerful brands starts boycotting Amazon, giving preference to some of its competitors, the company will suffer.

We have to remember that Amazon reinvented itself, going well beyond its original online bookstore status. The company opened new avenues through e-commerce and helped to push for huge operating efficiencies in the whole business of logistics. To do that, the company invented several tools that no one had, and along the way, it became a computing powerhouse. AWS alone is responsible for most of its profits. No one could have predicted that at the company’s IPO.

That’s the magic of relentless innovators. Pushing to achieve what everyone else thought impossible. However, at this point, the company may be pushing too much. The constant pressure on brands, some of them helped Amazon to grow to where it is, might come with a big price tag. Amazon might attract unwanted attention. No one can guarantee that the scrutiny that Facebook (NASDAQ:FB) is facing over the use of its data won’t fall over Amazon. And, in this case, the company seems to be using brands’ own data to become its competitor.

I owned Amazon shares until a while ago but sold my stake. Yes, growth still seems great, and the company keeps generating innovative ideas constantly. But, the current valuation already seems to incorporate improvements in e-commerce profitability, and I am afraid that pushing it even further will be self-defeating (i.e., attracting regulators).

Instead, they are developing online channels themselves. Although it has been successful in developing diapers, it will hardly have the same success against Nike (NKE) sneakers, for instance.

On the server operations side, there are now several competitors in the cloud space. Meaning that, although the global market for cloud should keep growing, AWS will now face more intense competitive pressures. The M&A action involving IBM (IBM) buying Red Hat (RHT) is a good sign of that.

Finally, the tremendous growth in the two-day delivery service has shown Walmart (WMT) and Target (TGT) that they can do it too. All-in-all, the current expectations that the company will keep growing as it did during the past year, might prove unrealistic. And, if you add a macro scenario of monetary tightening, the more unrealistic it gets.

Disclosure: I am/we are long RHT. I wrote this article myself, and it expresses my own opinions. I am not receiving compensation for it (other than from Seeking Alpha). I have no business relationship with any company whose stock is mentioned in this article.