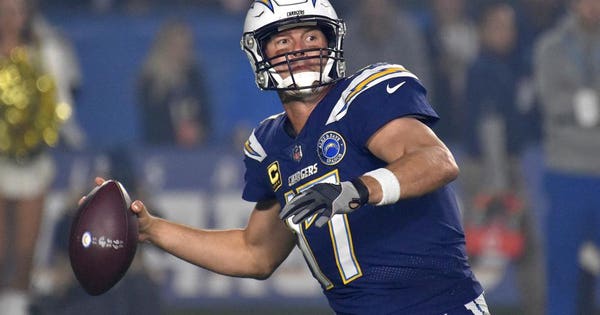 Ravens Vs. Chargers Head-to-Head Results (Since 2009)

Baltimore head coach John Harbaugh claimed that the 2018 Ravens are the best team he’s had in his career (via ESPN):

This is what a real team looks like. It’s the best team – T-E-A-M. It’s the best bunch of guys who understand what it means to have each others’ backs, to fight through adversity and never be divided by anything. They block out all the outside, turn to each other for strength and are there for one another. That, to me, is what makes a team. This is the best team I’ve been around.”

Chargers quarterback Philip Rivers realizes that he may not have many opportunities left to win a Super Bowl before his career comes to an end (via FOX Sports):

When you’re younger you think this is it. You get a shot every year. Then when you don’t go once in the last nine or 10 years, you realize how fleeting it is and how hard it is to get in.I’m excited about the opportunity. I think from the experiences I’ve had, both positive and negative, you take that with what you can, and you just go play.

Ravens veteran safety Eric Weddle spoke about what it meant to get into the 2019 NFL Playoffs after missing out the previous three seasons (via PennLive.com):

It was a long offseason. Everyone knows it. It wasn’t too good of times here all offseason, telling us how bad we were, and guys can’t play, and we can’t finish games, ‘yada yada yada, yada yada yada.’ Especially me living here all offseason, it was cold and long. But, that was the motivation. ‘Wink’ [defensive coordinator Don Martindale] came in and really changed some things up and was upfront and honest from the beginning that we’re going to do things differently, and we’re going to be as one. And we get these chances that we’re building ourselves mentally and physically to get in those moments and win those games, and we got in that situation on Sunday. There wasn’t a guy that blinked or wasn’t confident in the situation that we were going to go stop them, because we’ve been preparing for that moment for a year straight, and that’s what’s driven us to be where we’re at and to play the way we do.

Chargers head coach Anthony Lynn discussed the potential comeback of tight end Hunter Henry, who has been on the shelf with a torn ACL since May (via ESPN):

We want to give a good look at him this week to see where he’s at,” Lynn said. “I like the progress that he’s been making, but he hasn’t played football for a long time — since last December … so it’s been a while. He’s going to need to really show us that he’s ready [to play]. I believe that the knee is stable. We did some things last week and thought he looked really good. Now, it’s just about conditioning, the chemistry with the offense and just playing football.

Bolts defensive tackle Damion Square claims that he’s happy to be meeting up with the Ravens again in the Wild Card round (via Chargers.com):

Adam Schefter noted that the Chargers should have two key players that have been on the injury report back on the field this Sunday:

Despite limping off in Sunday’s fourth quarter, Chargers RB Melvin Gordon is expected to play Sunday against the Ravens, per source.

Chargers TE Hunter Henry, who tore his ACL during the off-season, also is expected to play Sunday against the Ravens, per source.

NFL Throwback posted highlights from the 2014 clash between these franchises:

The @Chargers had trailed all day long.

But Philip Rivers (with a lot of help from @Keenan13Allen) had the Ravens right where he wanted them. (Nov. 30, 2014) #SDvsBAL #LACvsBAL pic.twitter.com/tQlzE5EuqY

Chris Hayre pointed out an interesting stat regarding the broadcast team for this game:

Jim Nantz and Tony Romo will be on the call Sunday for Chargers-Ravens on CBS. It’s the first time they’ve called a Chargers game since Thanksgiving 2017. Since then, LA is 17-5.

The Undefeated found that Lamar Jackson will become the youngest quarterback to start an NFL playoff game on Sunday:

When the Ravens host the Chargers in the AFC wild card game, Lamar Jackson will pass Michael Vick as the youngest QB to start an NFL playoff game.

Erik Taylor has the weather forecast for Sunday afternoon in Baltimore:

Got a little #PurpleFridayFuelup for the #Ravensflock. Looking Sunday @Ravens v. @Chargers highs in the 50s with gusts up to 25 mph out of the NW. Let’s get a W. #mdwx pic.twitter.com/zlmcVbrD1z

Dan Roche revealed some stats that show the winner of this game might have a rough go of things if they are forced to play the Patriots in the Divisional Round:

Houston, Baltimore or LA is coming to Foxboro next weekend: