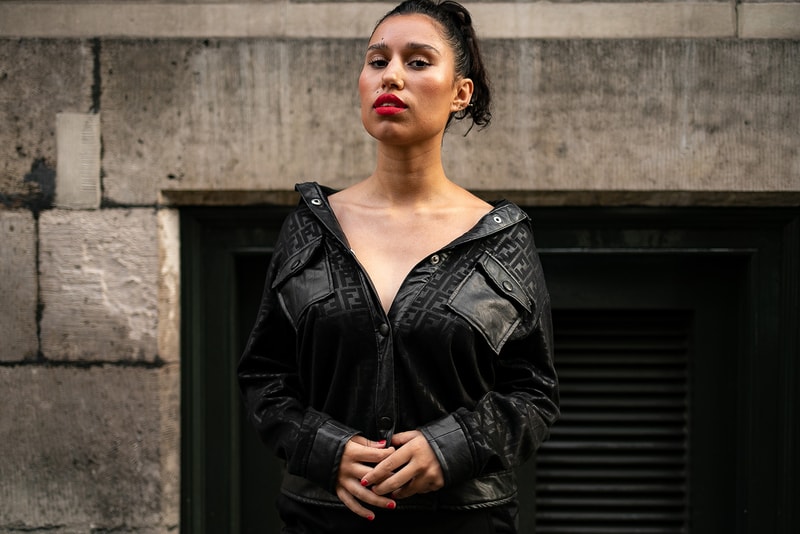 If you’re familiar with the UK music scene, there’s no doubt you’ve come across RAYE. The South London native has quietly been making moves for at least half a decade but the past year has seen the star truly come into her own. Following collaborative tracks with fellow London girls, Mabel and Stefflon Don as well as rapper Kojo Funds that were certified UK chart hits, she had a feature on Jax Jones’ track "You Don’t Know Me," which earned a Brit Award nomination.

2019 looks set to be even bigger – it’s already been revealed that RAYE will be supporting Khalid as he embarks on his Free Spirit World Tour later this year (she toured with Halsey on her 2018 Hopeless Kingdom tour, too). And since music and fashion go hand in hand, it seems fitting that she’s already nabbed campaigns with Converse and Timberland – with many others on the horizon, we’re sure.

Her uniquely contagious brand of dance-pop and stellar style isn’t all she’s become known for though. We caught up with the rising star to talk about her the British music scene, being a working woman in an male-dominated industry and of course her new track, "Stay," with David Guetta – keep reading for more. What are your earliest memories involving music and how did you know it was something you wanted to develop as a career?
I wrote my first song at the age of 7; that’s probably my earliest memory of music. I think it’s something I’ve always known I’ve wanted to do. I come from a really musical family so never really considered another career path.

What artists do you count as your favourites and are there any that made you want to be a musician?
My favourite artists include Alicia Keys and Jill Scott, I absolutely love the album Who Is Jill Scott. I don’t think there are any specific albums or musicians that made me want to do music myself, it was more an admiration for music as a whole. I love all genres of music and love to take inspiration from them all wherever I can.

You’re born and raised in London – how has that influenced both your personal fashion sense and musical style?
Being born and raised in London has definitely had an impact on both my personal and musical style. I love that Londoners are so bold with all their style choices – I like to think that’s reflected in my fashion and my music; I like to take risks with both. I also love the cultural diversity in London – I take lots of inspiration from that too.

"A struggle is definitely that nearly every session I go to is just a room full of men. Especially when songwriting, it can be hard to show male producers and other writers a female perspective."

You dropped your EP around 5 years ago now at just 16 years old; how would you say you’ve grown personally and professionally as an artist since then?
Since then I’ve been lucky enough to work with many incredible musicians, producers and artists. I’ve learned a lot from them all both personally and professionally. I like to think it’s made my music grow and evolve to hit a higher standard. I take every studio session as a learning opportunity and try to take something away from it.

You’ve worked with a steady stream of UK talent like Charli XCX and Stormzy; what’s exciting you most about the British music scene right now?
I love that artists from the UK are really leading the way in the music industry right now. I like to look to the UK music scene to influence my work. I think we’re making something really different to what the Americans are producing and that’s really exciting. You have a strong focus on “girls supporting girls” and count Mabel and Stefflon Don amongst friends and collaborators; I can imagine being a young woman in the music industry still isn’t easy to navigate. What have been some of the struggles and also highlights so far?
A struggle is definitely that nearly every session I go to is just a room full of men. Especially when songwriting, it can be hard to show male producers and other writers a female perspective. I think it speaks volumes that "god is a woman" by Ariana Grande and ‘Work’ by Fifth Harmony were both entirely written by men! Saying that, however, I do also meet some incredible male producers and writers who are so open to listening to and learning from a female perspective that it makes the entire experience fantastic.

People may not know that you’ve penned some huge hits for other global artists – what do you love about songwriting and is there anyone you haven’t yet written a song with that you’d love to?
Songwriting is definitely my creative outlet. I feel like it’s how I release all of my creative energy. Songwriting for others is also really fun because you get to step into someone else’s shoes and write from a different perspective. I would absolutely love to write with Alicia Keys, I think she’s amazing.

You released another EP last year; is there an album in the works? What else is in the pipeline for 2019?
There’s definitely an album in the works although I’m not sure when exactly it will be coming out. In 2019 I have a lot of new music coming, including my new single with David Guetta called "Stay" (releasing May 10). I’m really excited about this track and can’t wait for everyone to hear it.