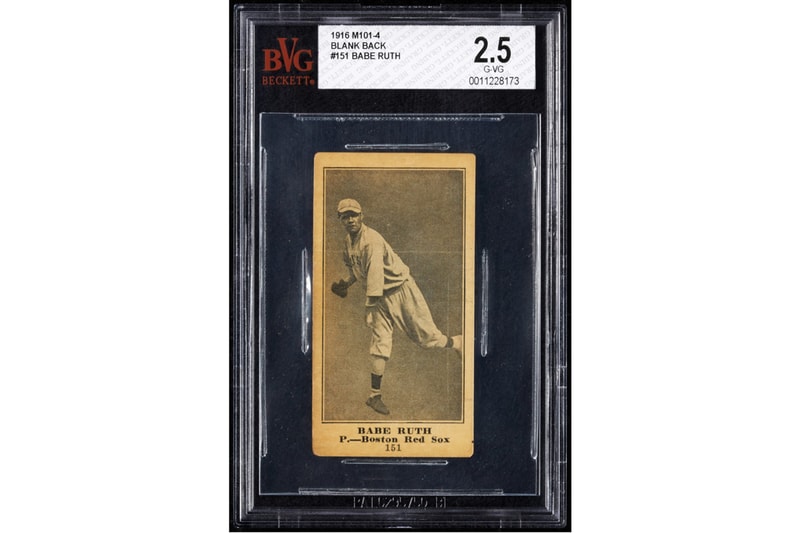 Ellen Kelly of Westernport, Maryland found a rare Babe Ruth baseball card in her family’s antique piano and she’s finally about to cash it in. According to artnet, Kelly purchased the piano at a family estate sale for a mere $25 USD back in 1992. At the time, she noticed that the instrument’s pedal was sticking out and called a friend to repair it. Tucked underneath the pedal was a stack of 112 baseball cards from 1916 including the rookie Ruth card that portrayed the young athlete with the Boston Red Sox.

27 years later, Kelly decided that she wants to sell the 1916 M101-4 Babe Ruth card alongside the heap that features over 20 other Hall of Famers from Major League Baseball. The cards are currently a part of Goodwin and Company’s Masterpieces and Uncommon Commons auction which ends April 25.

The Ruth card, which carries a 2.5 grade from Beckett Grading Services, is leading the sale with bids over six figures at Goodwin’s website. As for its presale estimate, “We thought $60,000 to $75,000 was a fair estimate for this card,” Steve Bloedow, Beckett’s media director of auctions, said in a public statement.

In other notable auctions, Jeff Koons’ iconic Rabbit sculpture will go on sale at Christie’s New York this May.

A Maryland woman found a stack of 1916 baseball cards in a piano she purchased. Twenty-seven years later, she’s about to cash in by selling them. The bid for the Babe Ruth rookie card is already $98,525. #boston25 #baberuth #pianobaberuthcard