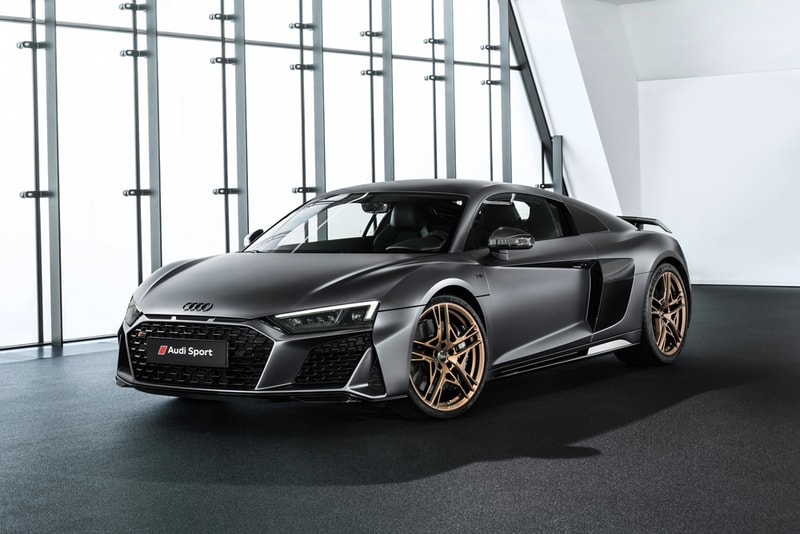 Audi‘s futuristic technology to help drivers avoid red lights has been one of the brand’s latest developments, but the German manufacturer took a page from its history book to craft its new R8 V10 Decennium. Named after the Latin word for decade, the Decennium pays homage to the V10 engine and celebrates its 10th anniversary through a highly-limited design.

The sports car coupe is defined by an exclusive "Daytona Gray" colorway on the exterior, while milled 20-inch wheels and an intake manifold coated in matte bronze help deliver a striking aesthetic. Gloss black is painted on the front spoiler, side sills and diffuser, coordinating with the Audi logo rings branded along the outside. Black remains the key color for the interior, including on the quilted rhombus-patterned seats, gear selector and Alcantara steering wheel, with copper-toned stitching adding contrast throughout. Other key details include carbon fiber side blades, exterior mirrors and door sill trims, as well as "Decennium" branding in several areas. As for power, the vehicle boasts 620 hp, 427.8 lb-ft of torque, a top speed of 205 mph and can achieve 0-62 mph in 3.1 seconds.

For more Audi updates, read about the label’s e-tron GT Electric Concept, which is expected to make a cameo in the upcoming Avengers 4 movie.