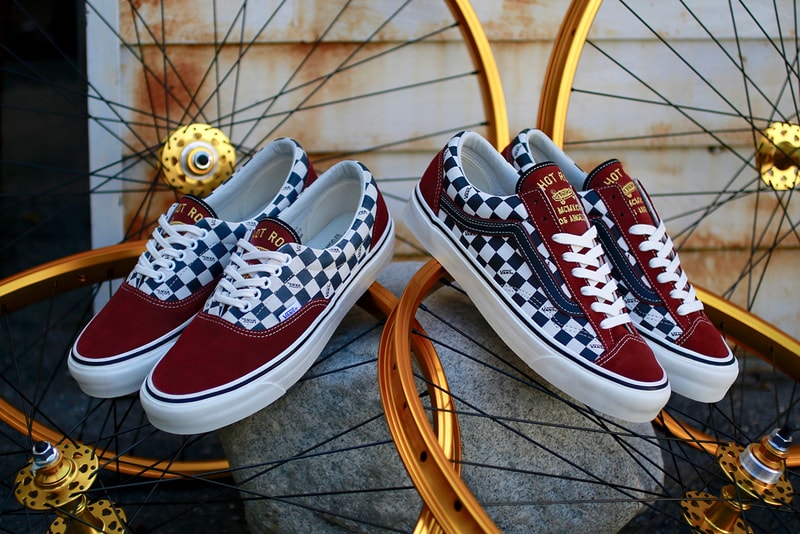 Vans Vault has tapped West Los Angeles shop Hot Rod LA for their first collaborative footwear pack, releasing this week. The shop is already a popular Vans and Vans Vault dealer on the West Coast, so it’s surprising that this is the first time the brand will be bringing its own perspective to the design table. Appropriately named "First Love", the release will feature two classic silhouettes: an OG Era LX and OG Style 36 LX. Providing even more context around the collaboration’s name, both pairs are inspired by Hot Rod’s owner’s first pair of Vans that he received as a birthday gift in 1983.

Both the Era LX and Style 36 LX feature Madder Brown suede combined with iconic Vans black checkerboard printed on Marshmallow suede. Gold embroidered Hot Rod branding makes an appearance on the tongues while Hot Rod’s catchphrase, "get your Vans at Hot Rod," subtly rests on the lateral side of each shoe underneath the Vans tag. A Marshmallow midsole and laces complete both styles.

Hot Rod LA is giving Vans Vault collectors plenty of chances to purchase the pack this week. The Era LX will first drop this Friday August 16 at a friends and family event located at the brand’s brick-and-mortar location in West LA. This initial release is RSVP-only and will be limited to only 100 pairs. A full online release will follow the day after on Saturday, August 17 on Hot Rod LA’s website. For those who miss out, a second special in-store release will happen on Sunday, August 18 for the Style 36 LX only, limited to 75 pairs. The August 18 release will also offer custom built SE Racing "BIG RIPPER" bicycles to select lucky winners. Attendees are encouraged to bring their bikes in order to participate in a Hot Rod bike ride celebrating the release (information below).