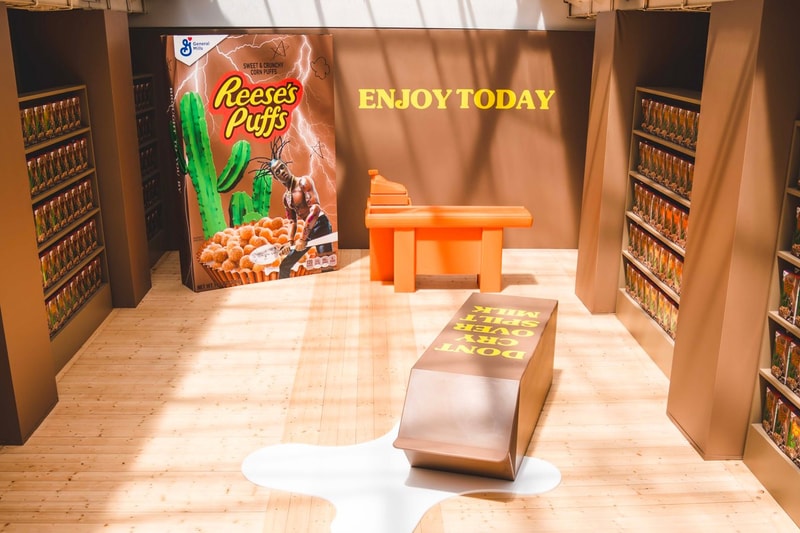 Following up on the reveal of his collaboration with Reese’s Puffs Cereal, Travis Scott debuted a Paris pop-up featuring a cereal-themed space. The nostalgic General Mills breakfast treat was arguably a staple during the ’90s and early ’00s.

Though only open for four hours, the exclusive event was accompanied by a surprise online release on Scott’s official website. The pop-up was decked out in a deep brown shade that matched Travis’ reimagination of the chocolate peanut butter cereal. Additionally, walls included the special edition boxes alongside a bright orange cash register, an extra large silver spoon and an overturned milk carton.

Throughout the space, an assortment of limited-edition hoodies and T-shirts were on display. These pieces featured similar graphics to the collaborative cereal boxes. Reese’s Puff branding and phrases inspired by Scott appeared on the pieces including "DON’T CRY OVER SPILLED MILK" and "ENJOY TODAY." Merch on display at the pop-up priced out between €45 EUR and €90 EUR (approximately $51 USD and $102 USD). The online drop of Travis Scott’s Reese’s Puffs Cereal collab sold out in 30 seconds.

Take a look at Travis Scott’s Reese’s Puffs Cereal pop-up in Paris in the gallery above.