I just keep thinking about the shoes. Brown suede and spanking new, they were sitting inside a “professional clothing office”—essentially a lending library for job interview clothes—in the career center of the L.A. LGBT Center’s new $141 million Anita May Rosenstein Campus. Would-be borrowers could slip the shoes on in relative privacy, without worrying that a nosy salesperson might judge them for presenting as the “wrong” gender.

“A lot of our members don’t know how to dress for a job,” says Kristin Flickinger, director of programming for the LGBT Center. “Now, imagine trying to dress as the gender you feel most comfortable as while you’re going out for your first interview. Where do you learn how to do that?”

Of course, fashion is just a fraction of what the sprawling, intergenerational campus provides to vulnerable LGBTQ people. The new campus includes 100 beds for homeless teens, a new senior drop-in center, an academy, and career counseling—all inside an airy building that seems to levitate above Santa Monica Boulevard in Hollywood. According to Flickinger, around 100 to 150 youth visit the drop-in center here every day.

Here’s an exclusive, behind-the-scenes look at how the campus operates. 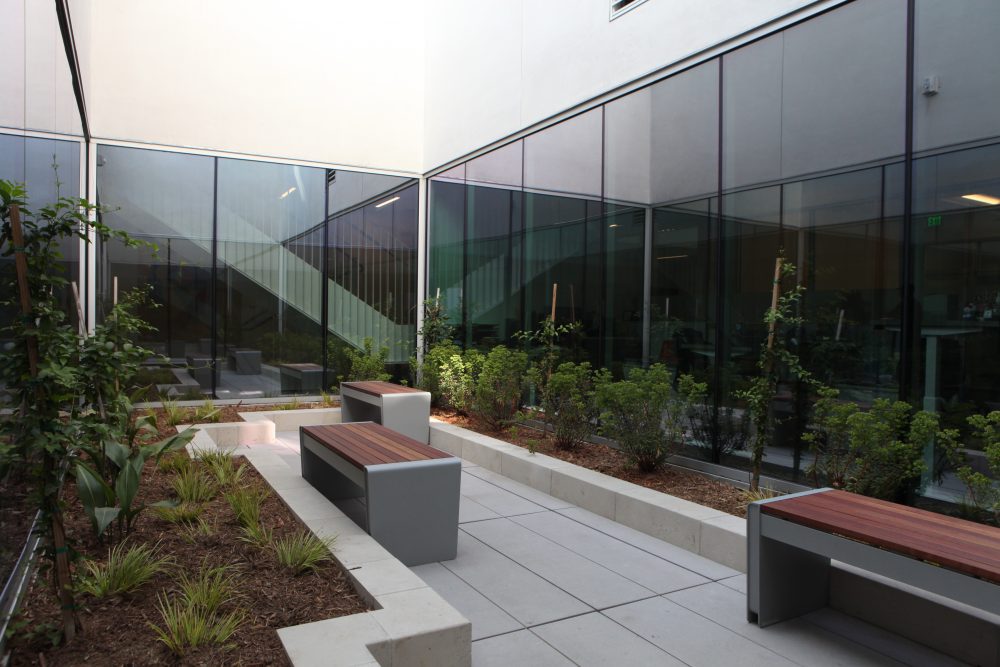 The new campus provides plenty of space for nature-aided reflection. “Yes, we have security here but doesn’t feel super locked down,” says Flickinger. “It’s light and bright and you can see through the space.” 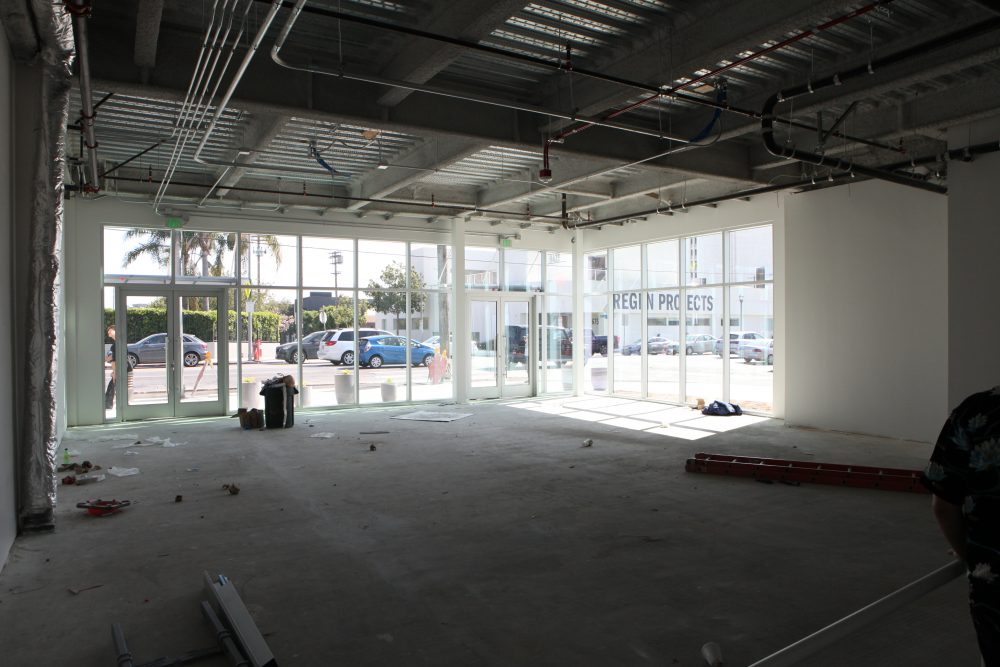 A 1,600-square-foot retail space will eventually play host to a café and pop-up shop run by residents. “We envision this as an incubator space for clients who have micro-businesses, like seniors who are making soap, writing books, or making radical art,” says Flickinger. At night, Flickinger says, the center will rent out the space for things like poetry readings, open mics, performance art, and community meetings. 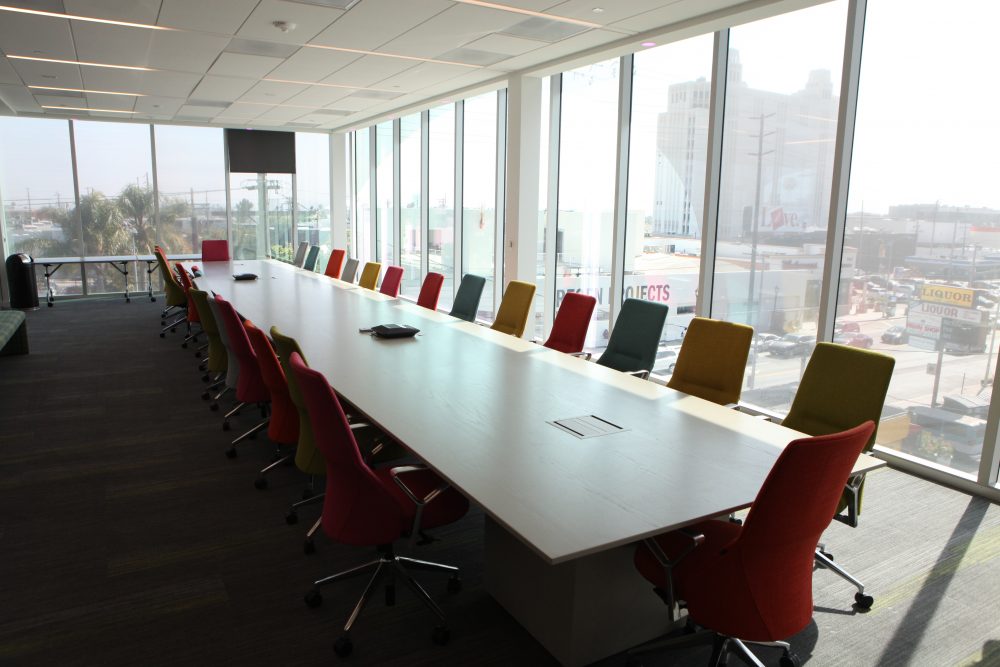 A spacious room for board meetings offers sweeping views of Santa Monica Boulevard. 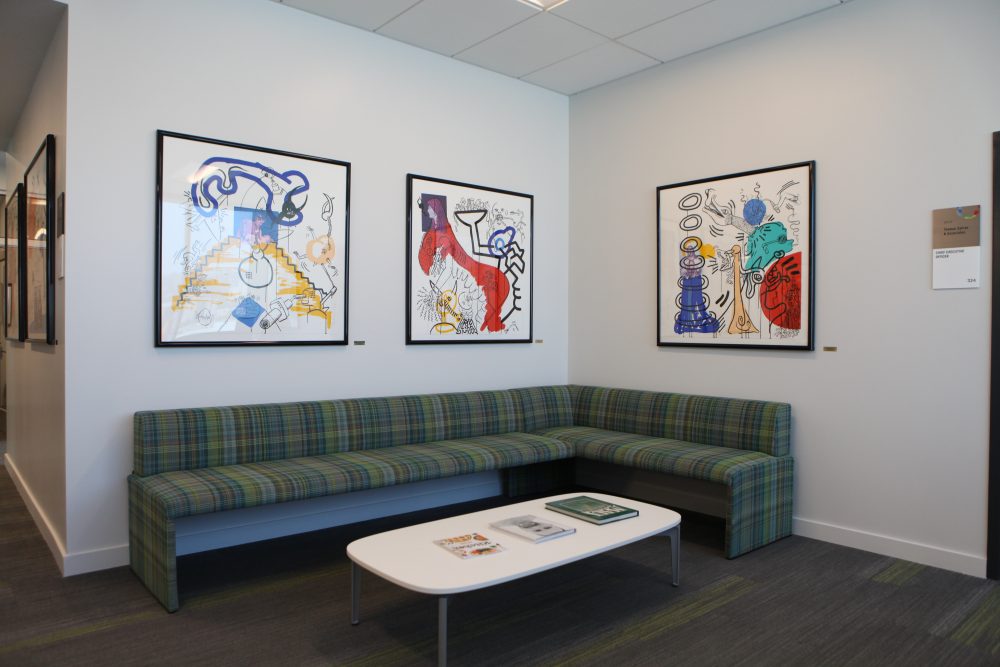 The waiting area outside CEO Lorri Jean’s office is decorated with ten original Keith Haring prints donated to the center by the co-owner of Hollywood Forever Cemetery, Tyler Cassity. 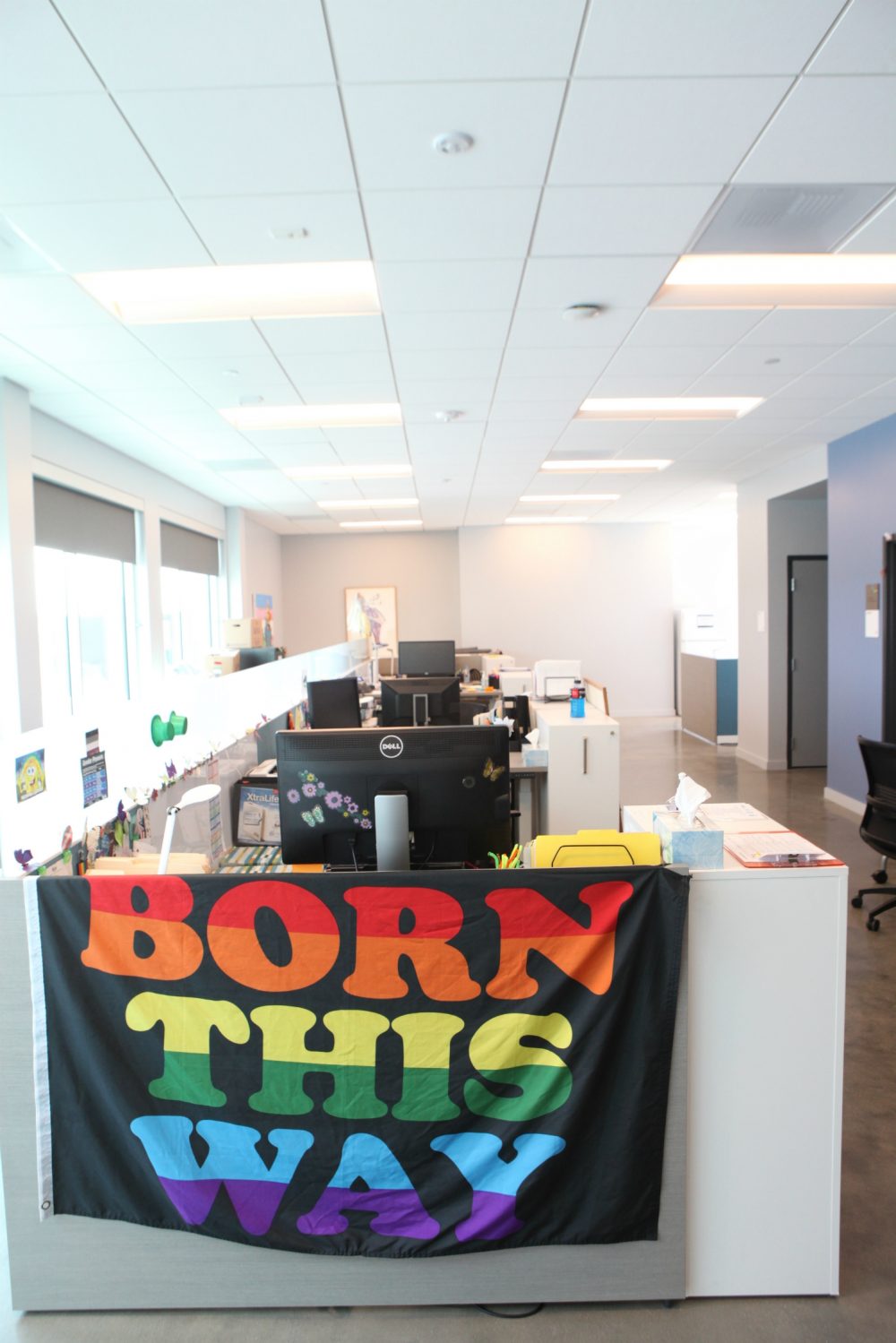 The employment office is crucial to the Center’s mission, helping members gain career skills and connecting them to supportive workplaces. “Many of these kids don’t have a parent’s buddy they can rely on, so we function as that family unit,” says Flickinger. The Center even provides training for employers. “You don’t have pronoun training? Great, we can come in and do pronoun training for you. You don’t know how to work with marginalized communities? We can help with that, too.” 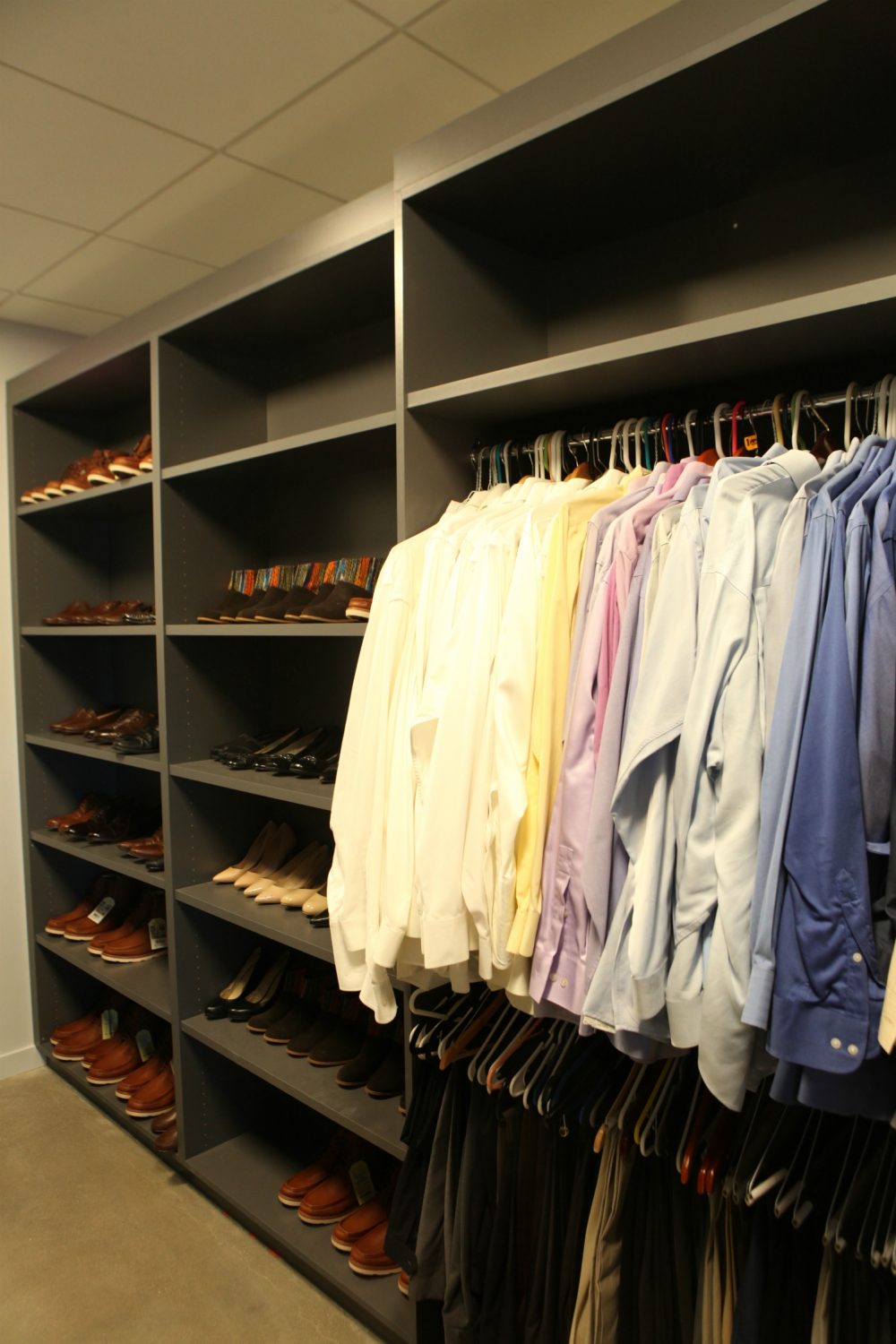 In the employment office’s walk-in a closet, members can find an assortment of work clothes and accessories — including dress shirts, belts, suits, ties, and shoes—that match their gender identity. “We try to provide our members with a judgement-free shopping experience,” says Flickinger. 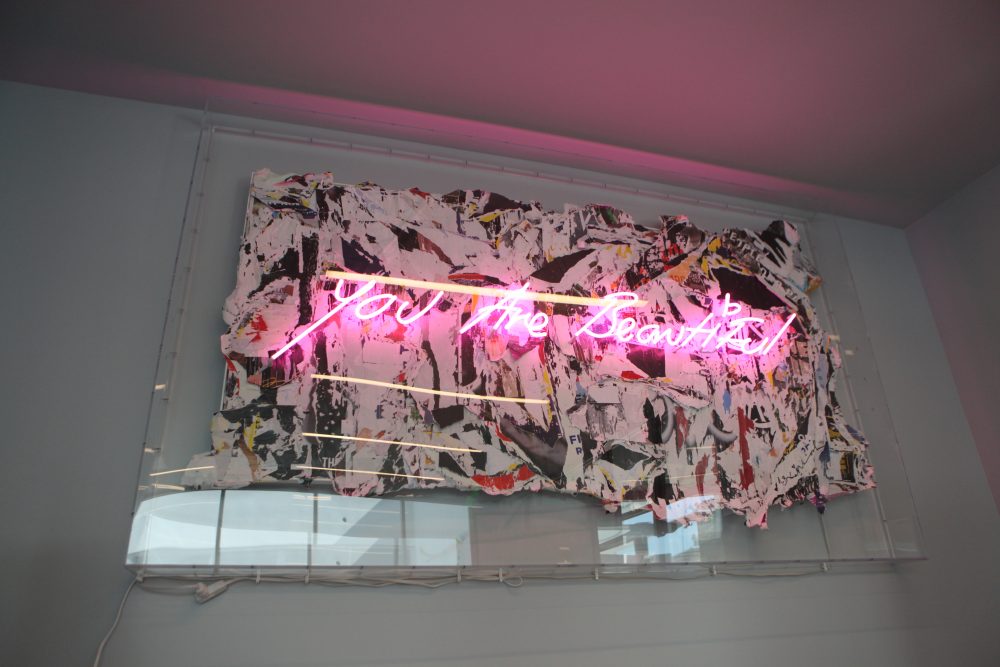 Neon art greets visitors to the drop-in center. Every day, three to five brand new people walk off the streets and register at the center for the first time, according Flickinger. Within 15 minutes of entering the space, they’re seeing a case manager who is evaluating their employment, education, housing and healthcare situations. From there, they can be plugged into services. “Some people come for the simple reason that they need a place to sleep at night. But, as often as not, they need a sandwich or a place to crash because they’ve been walking all night,” says Flickinger. 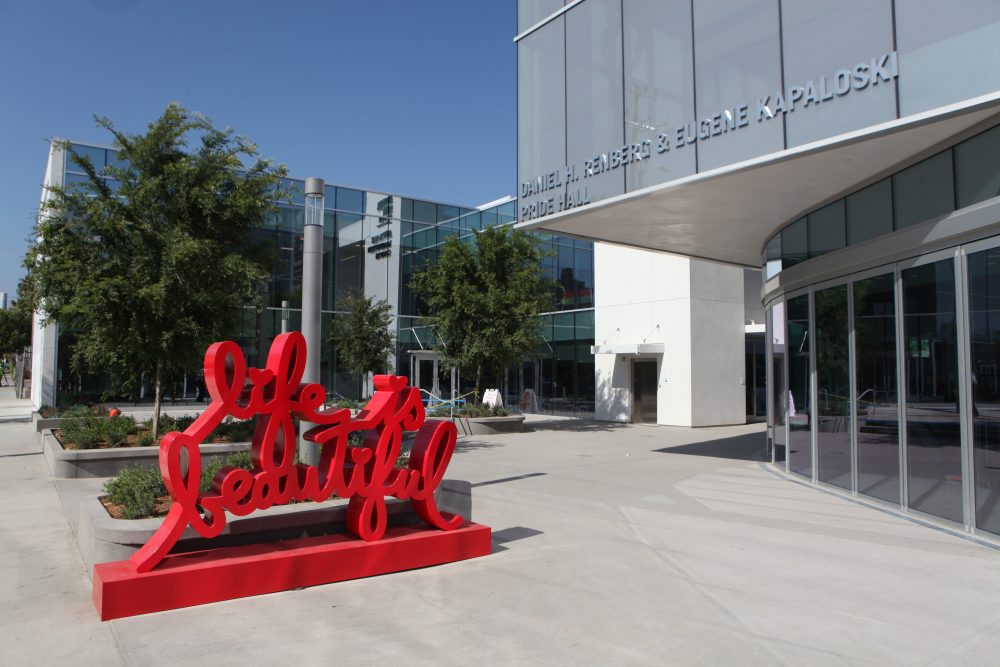 A sizable outdoor courtyard gives visitors a chance to relax and reflect. 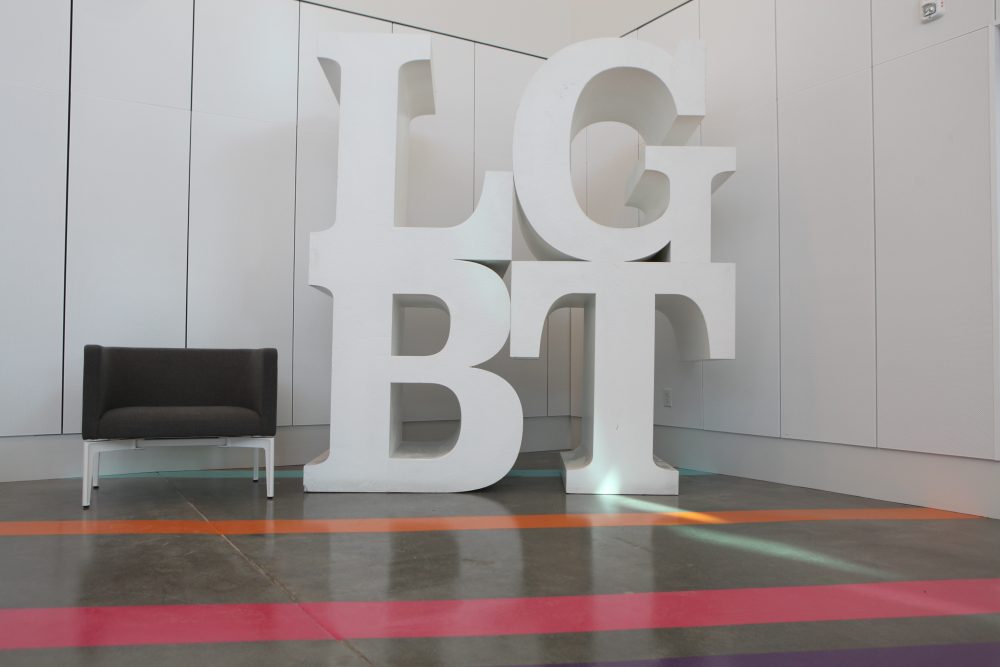 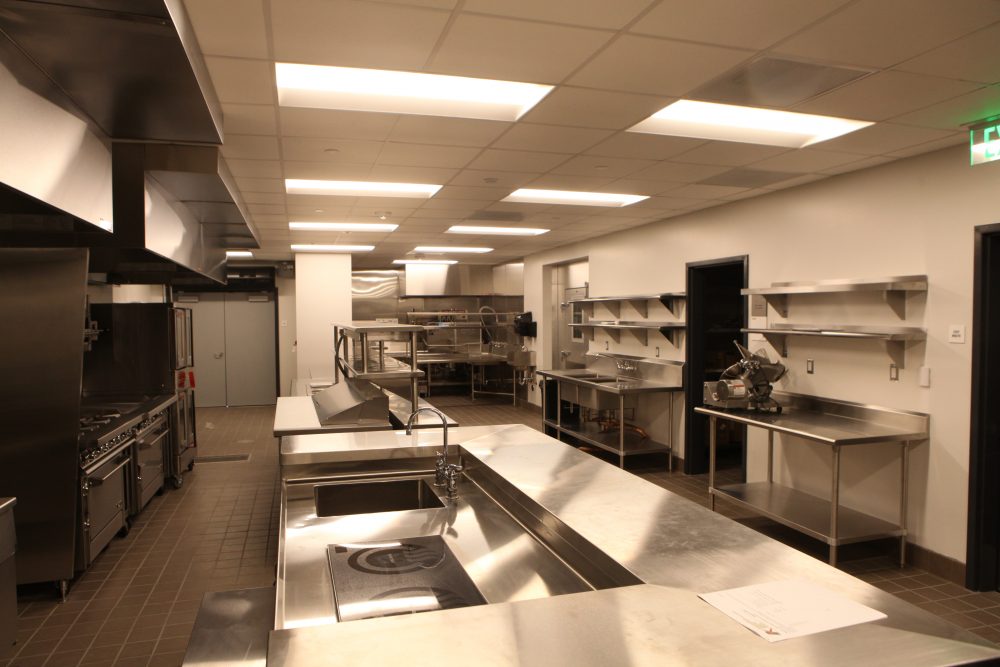 A large, commercial-grade kitchen will play host to an intergenerational culinary institute for youth and seniors. “The kitchen is an exciting place to do intergenerational programming because it has a family atmosphere, and more than 70 percent of our youth say that they have experienced some sort of family conflict, or disruption that has led them to seek our services,” says Flickinger. The first cohort is starting this week, led by a chef from the French Culinary Institute. 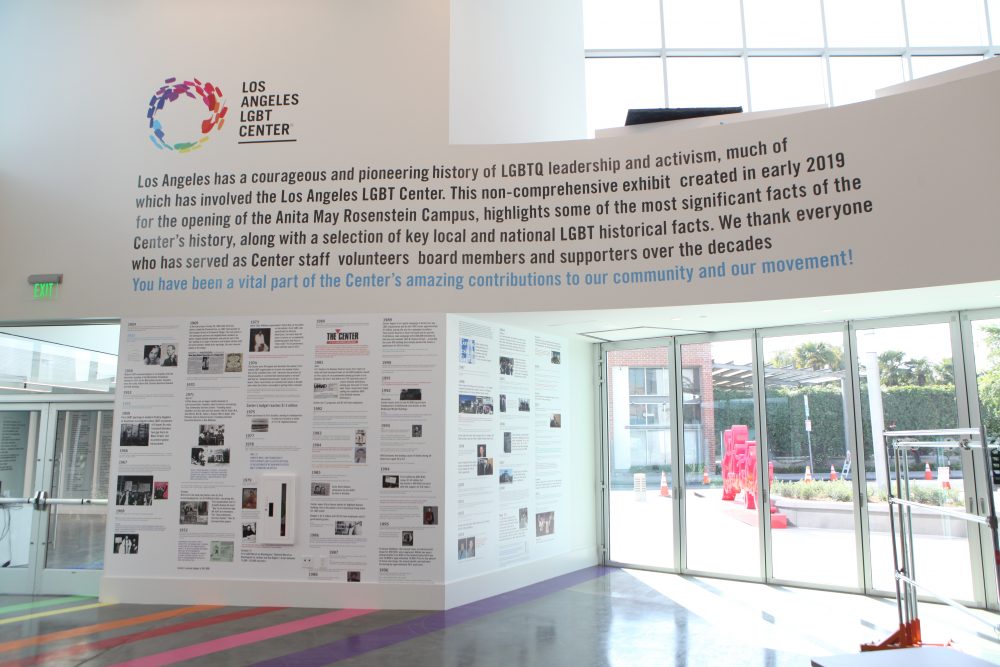 An airy auditorium features a mural charting the history of the center. 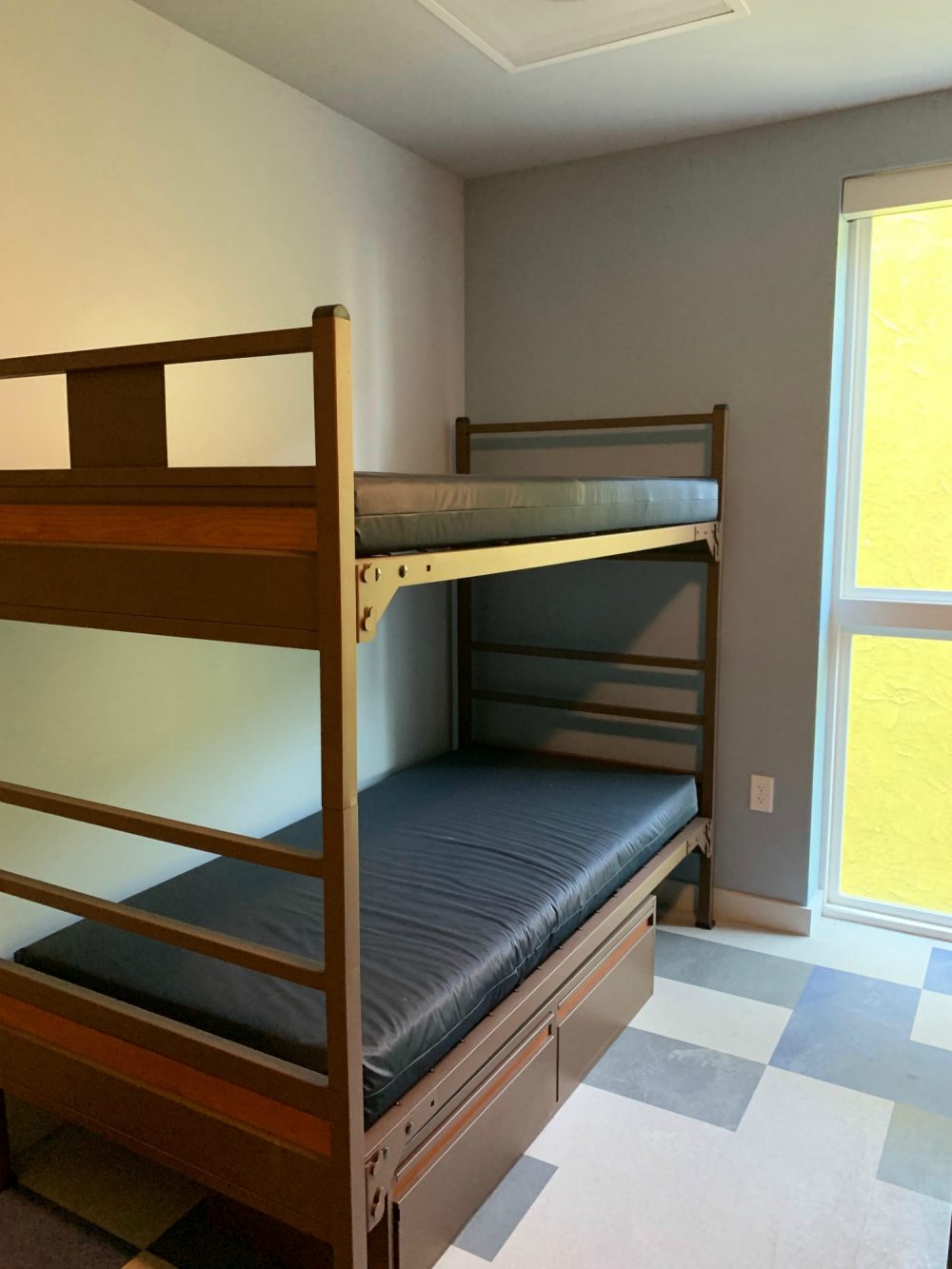 Those who are staying up to six months at the campus can stay in one of two big, 20-bed dorms. For those staying longer—up to 18 months—the Campus offers transitional housing: dorm-like rooms with up to four beds. “As people become more responsible, they can graduate to their own room,” says Flickinger. The Center also provides rapid rehousing, or scattered site housing throughout the community.

RELATED: The L.A. LGBT Center’s New Campus Is Like a Miniature Queer City