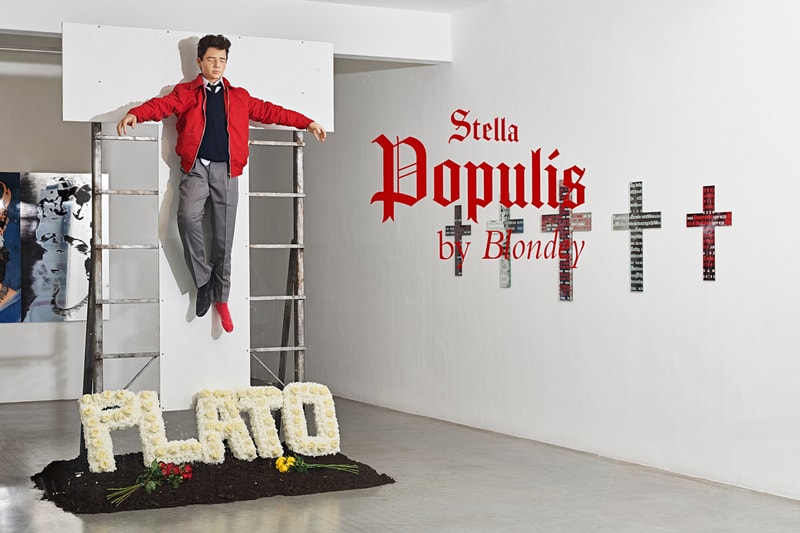 Before doors open to the public on June 7, Blondey McCoy gives us an exclusive look at his first solo exhibition called “Stella Populis” at London’s Ronchini Gallery.

To further celebrate the show, Blondey will release a limited edition book entitled Stella Populis – POP WILL EAT ITSELF and six gold trimmed plates that spotlight his 25 part series called Epiphanies. For the project, portraits of celebrities including Justin Bieber, Kendall Jenner, and Emma Watson are observed on varying English breakfasts. The set of six plates will be available in an edition of ten on Blondey’s website and Ronchini Gallery this Friday at 11 A.M. London time.

Get a closer look above and then head over to Ronchini Gallery’s website for further exhibition details. “Stella Populis” will run through August 31.

I will be giving away 10 out of a thousand copies of my new book ‘Stella Populis – POP WILL EAT ITSELF’ to my favourite answerers of the below question. Who is the God or Goddess of pop culture you deem most worthy of worshipping and why? The bewk has been lovingly published by @IDEA.ltd and will become available from my website at 11 A.M. Friday morning, Londra time. Winners to be announced before then.

These are my new series of mirrored and acrylic crosses, engraved and UV printed with lists of sins (some ‘real’, some seemingly invented on the spot by basic bitches and some written by yours truly). The first letters of each sin acrostically spell the corresponding works title (lines lifted from the Pet Shop Boys’ anthem ‘It’s a Sin’). This series is of course entitled ‘Sins’ and is a further development of my 2017 series of mirrored crosses ‘Confessions’.

This diptych is called ‘Queen Di. II’. It’s a UV print on mirrored aludibond which has been face mounted to a piece of reflective acrylic. In bonding these two materials together using the diasec process the gel has pulled at the print and clouded the mirror, like the conspiracy theories have clouded her tragic death. I love it when shit like this happens. This is a video of me writing the above caption…