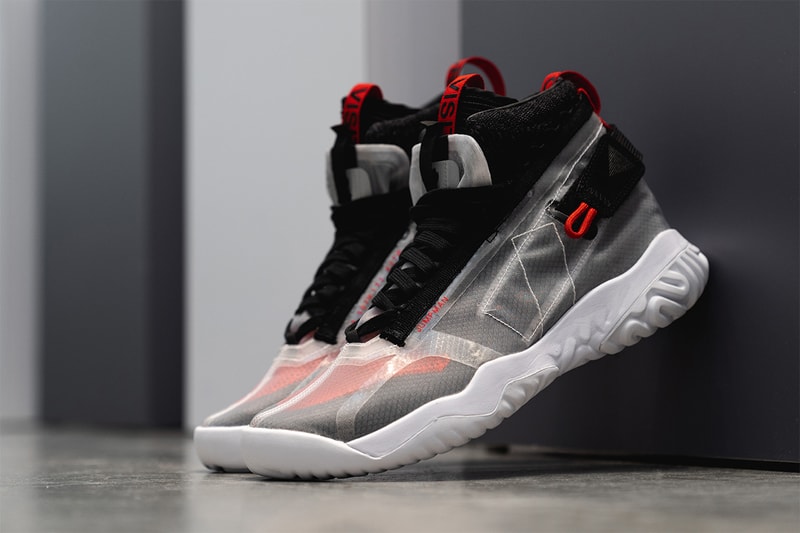 Our weekly drop continues as we showcase releases to look for from your favorite brands, curating the most hyped releases and strongest silhouette/colorway combinations that should not be missed. Take a look at the list below and let us know what launches you’re looking forward to. Nike’s celebratory "Noise Cancelling" pack was originally available during the opening of its new NYC flagship but now its coming back. The collection’s returning Air Jordan 1, Air Force 1 Low and Cortez options each feature all-white uppers with removable Swoosh logos along with translucent tongue tabs. They’re a timeless addition to any all-white sneaker roster. Initially shared back in January, the Nike Kyrie 5 "Duke" now gets an official nod boasting blue flame graphics along the upper with reflective touches on each side’s Swoosh logo. You’ll also find added branding in the form of a small Duke Blue Devil head atop each tongue with nods to Irving’s former jersey number on the right heel. Paying respect to the Nike Vandal, Edison Chen and KB Lee’s Emotionally Unavailable line dip the Air Force 1’s canvas upper in red. Its outsole duplicates the aforementioned upper while "Sail" coloring is found on the midsole and removable ankle strap. A removable heart-shaped zippered gusset adds a bit of flair to the model along with bright purple chenille to the Swoosh logos. The upcoming Jordan Apex-Utility blends the modern Air Jordan 1 Flyknit with Nike’s lightweight React midsole technology. The mashup holds the lightweight Air Jordan 1 upper within a translucent shroud — made popular with the React Element 87 — that’s met with adjustable heel straps for a custom fit. Added details include bold red tongue and heel tabs with “VISITOR” branding as a nod to guests stepping within the walls of Nike HQs worldwide. MTV and PUMA connect on a selection of new RS-X models in bright color options inspired by the ’80s, a significant decade for each brand. The first sees a white base with teal and light purple hits, while the second shares the same details on a black underlay. To top the design off, MTV’s logo is added to each lateral side in addition to complementing the PUMA stamp on each tongue. Aleali May and Jordan Brand’s partnership continues with a new release. The tandem’s roster already includes the Air Jordan 1 and Air Jordan 10. The collaboration carries on with the "Millennial Pink" trend while hits of “Bright Crimson” can be found on the midsole, heel pull tab and Jumpman insignias on both the tongue and back heel. CAT’s Intruder sneaker will be available in a unisex size run with a mix of mesh and nubuck throughout. Offered in "New Black" and "New White," the sole units are comprised of thick rubber with subtle speckles across its midsole. Lastly, CAT’s industrial stamp is found on each heel’s lateral side and tongue. The adidas YEEZY BOOST 350 V2 "Trfrm" — first seen in January — comes in a tonal grey colorway across the upper and a portion of the midsole. This colorway is offset by an orange-tinged sole unit and heel tab, plus the eye-catching color is also used on the silhouette’s side stripe. The adidas YEEZY BOOST 350 V2 “Hyperspace” colorway sees the sneaker’s reworked Primeknit upper treated with a tonal pale blue color palette. Other features of the sneaker include a post-dyed monofilament side stripe woven on the upper and a midsole boasting BOOST cushioning. Similar to 2014’s “Moon Landing” colorway, Nike’s space theme continues with an upcoming “Mars Landing” AM90 makeover. The upper is covered in a graphic inspired by the aforementioned planet’s surface with darker shades of orange and red spread throughout. Black is also found along the upper and matches its speckled midsole with steel grey Nike Air patches on the heel and tongue.