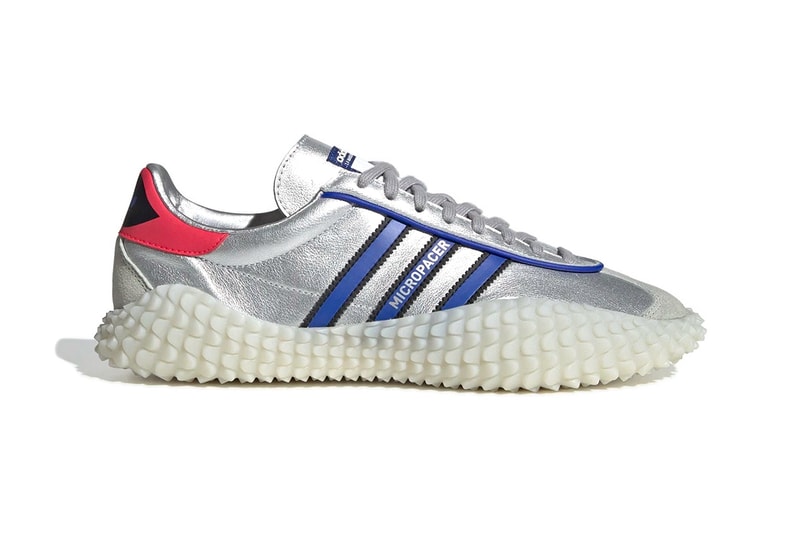 Hot off the heels of the recent release of the Micropacer-inspired adidas 98 X Crazy BYW, adidas is back with another edition of its retro-future design. This time around, the Three-Stripes has chosen to adorn its Country Kamanda with the silver-colored uppers of the iconic Micropacer.

Aptly named the CountryxKamanda variant, this particular silhouette gets its name from the combination of adidas’ ’70s Country Runner in the uppers, matched with the exaggerated Samba tread pattern found on the modern adi Kamanda — so with this colorway, it’s more like three shoes in one. While this version does not see any LCD screen at the tongue, it does incorporate the Micropacer’s colors of Silver Metallic, Powder Blue, and Shock Red. Branding comes in the form of Three Stripes at the medial and lateral sides, Trefoil branding at the tongue, and a red, black and blue Trefoil at the heel. Details include blue piping around the eyestay, silver laces, a grey-suede toe box, and "Micropacer" printed on the middle stripe.

Those looking for this past-meets-present take on the Kamanda can find it over at adidas.com, where it will drop February 23 for a retail price of $130 USD.

In other footwear news, atmos taps adidas for the exclusive Continental 80 "Scarlet."