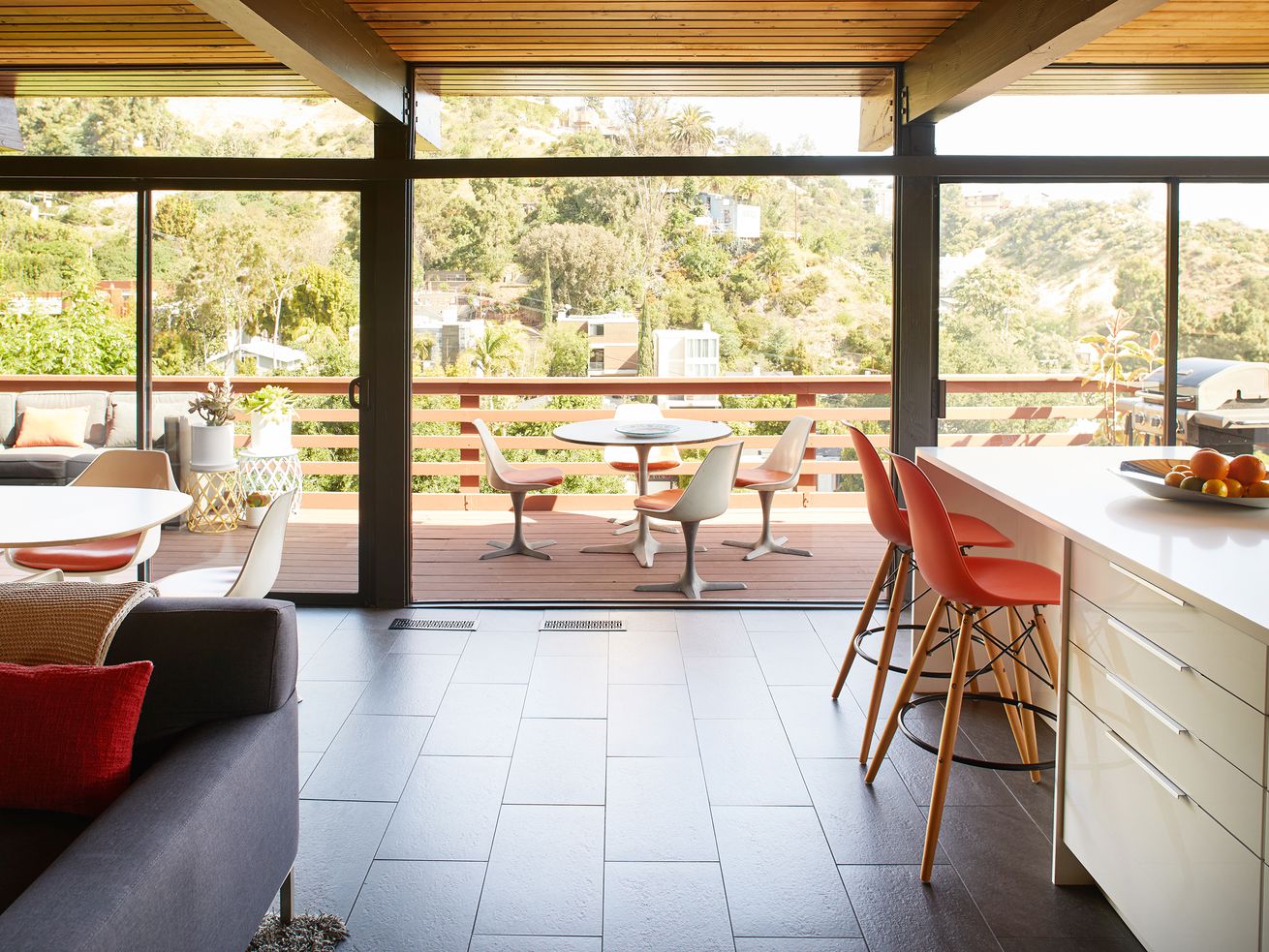 Redwood and concrete and pine—oh my

To stand any chance of survival, notable architecture—at any scale—needs dedicated stewards. Sometimes, this means going as far as securing “cultural landmark” status for your house, which is just what Christopher Caparro and Susanna Musotto did for their circa-1964 Doug Rucker-designed residence in Laurel Canyon.

Caparro, a creative director, and Musotto, a CFO, started looking in the picturesquely hilly LA neighborhood in 2015. When the couple wasn’t able to find anything that suited them, they moved to Hollywood, but kept their eyes on the market with hopes of making their Laurel Canyon dream a reality. After asking a colleague who lived in the area to let him know if any for-sale signs cropped up, Caparro laid in wait.

Caparro’s patience paid off in the spring of 2016, when that same coworker ran into a neighbor, Muriel Kessler, as she packed boxes in front of a rectangular midcentury house with a flat roof, wide eaves, and a footprint that cantilevered over a hillside. The house, originally built for actor Jack Hogan, had an eye-catching redwood-clad wood frame, and this piqued a conversation between Caparro’s coworker and Kessler. The coworker found out that Kessler was putting the home on the market—but not for about four months—and passed the agent’s number on to Caparro.

“I didn’t know what the house looked like, but I immediately called the agent,” says Caparro. “He threw out a price, and it was way out-of-range for us.” However, the agent advised him to check in after a month or so, and to visit the house. Caparro did just that, and just in time: The agent was with Kessler when he rang.

“My wife and I zipped over there and spent an hour with her,” he says. At the end of the conversation, Kessler invited them to make an offer on the home. It was exhilarating—and a little surprising.

“[We] had just moved eight months prior, and we were not thinking about moving so quickly,” Caparro explains. But when he saw the home, he knew it was what they had been seeking. Musotto told him to write an offer to “get it out of his system.”

“I could see the potential of the house,” Caparro says of the 1,800-square-foot, three bedroom, two-and-a-half bathroom home. “The bones were there. It’s a two-story post-and-beam with big glass windows. It was a beautiful shell that needed to be cleaned up.” They made an offer on a Sunday in August, and by Monday morning Kessler had accepted it, no negotiating required.

Even with the home’s structural integrity intact, there was work to be done before move-in day. Several features—like wall-to-wall carpeting, a Jacuzzi tub with mirrored walls, and a dark, small third bedroom—needed to be altered to fit a more contemporary lifestyle.

The couple got to work on the carpet first, removing it and installing tile on both levels. They also replaced the kitchen, which, though renovated, didn’t suit their taste, opting instead for a simple fit-out from Ikea to cut down on costs and swapping in new appliances. Later, Caparro repainted the beams on the upper level to a darker shade of brown, deepening the visual contrast with the knotty-pine ceilings.

The couple also swapped carpet on the stairs for floating mahogany treads to complement the original 12-inch redwood shiplap present elsewhere the home. “You just can’t get this quality of wood anymore—it’d be really expensive,” Caparro says of the redwood, which feels fresh even today. Rucker used the redwood “50, 60 years ago, but it was done in such a clean, modern way,” he adds.

The warm texture of the wood contrasts with the pebble-flecked cement flooring in the informal foyer and exterior entryway. This material point-counterpoint illustrates an important part of Rucker’s ethos.

“When you look through the front door, what you see first are the floor-to-ceiling windows and nature and homes off in the distance,” says Caparro, noting that the effect calls to mind a treehouse. “That was something Doug was keeping in mind. He likes the idea of leading lines that take you through a space. It makes it feel bigger and the hallway opens up. The posts and beams are all in the same alignment with you walking into the home.” Rucker also used illusion when conceiving of the home’s pocket doorways: Upon first inspection, when closed, they look as though they extend floor-to-ceiling. In reality, they are a normal height, but topped with a wood panel in the same grain.

Since moving into the house in October 2016, Caparro has become deeply invested in Rucker’s legacy, and in the prolific midcentury architect’s work across Southern California, primarily in Malibu.

“It was interesting to find Doug still alive and to learn more about the house and his work,” says Caparro. “My wife and I went to visit him in Malibu and we’ve remained friends since then. All the original tubes from his drawings are just waiting to be archived somewhere.”

Caparro is helping Rucker, who is in his 90s, find a home for his life’s work. He was even able to have Rucker’s own house officially recognized as a Historic-Cultural Monument by the City of Los Angeles. The distinction does restrict what homeowners can change, but only structurally (things like removing a wall or painting over brick). “Your house becomes…not a museum, but something that you just need to protect and conserve,” says Caparro.

Caparro performed another rare act in the world of architecture and real estate: connecting the dots of the home’s history—literally. Caparro and Musotto are only the third owners of the house, so he was able to introduce Rucker, Kessler, and architect Bernard Judge, another architect who had done rehabilitation work on the home in 2002.

Each of these parties, Caparro says, “were aware of each other, but had never really met one another.” Caparro even talked to Jack Hogan by phone, and Hogan gave him details on working with Rucker when the home was built.

“It was really interesting to put all the puzzle pieces together, to know the full history of the place,” says Caparro. “That made the home even more special to us: to feel like you have a connection and you’re part of the timeline—from when it began until who knows. We plan to be here for the rest of our lives.”