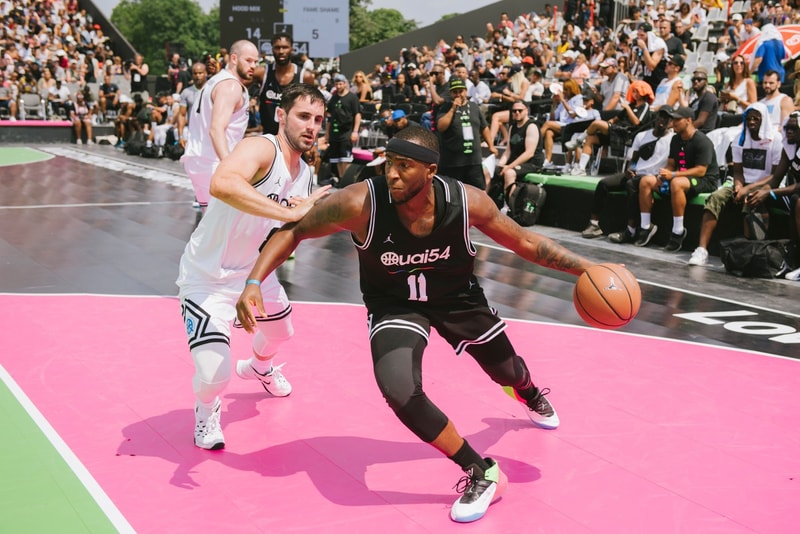 The Paris-based Quai 54 streetball tournament is set to return next month, and with that we now have our first look at the forthcoming "Quai 54" Air Jordan 8 and Air Jordan 1 Mid.

On the Air Jordan 8, the multi-panelled sneaker has been crafted from various textures of black suede, leather and mesh. Pops of color come in on the vibrant geometrical-patterns highlighted on the back heels and ankle, while chenille Jumpman logos can be found on the tongue tabs. The right sneaker’s Jumpman is encircled by red, blue and white, while the left’s is surrounded by green, red and yellow. The bold color accents have been inspired by the tournament’s multicolor basketball logo.

Over on the AJ1 Mids, the sneaker takes on a mostly black-and-white tumbled leather outfit while hits of vivid blue/red (featured on the right shoe) and green/yellow (featured on the left shoe) comes in on the ankles. Additionally, black Swoosh branding, chenille tournament patches on the tongue tabs, and a tonal pattern on both the collar flaps and back heels finishes off the look of these "Quai 54" AJ1 Mids. Finally the insoles have been embellished with colorful geometrical patterns as seen on the Jordan 8s.

Both the "Quai 54" Air Jordan 8 and Air Jordan 1 Mids are expected to release this June to coincide with the tournament. Keep it looked here for an official drop date. The tournament kicks off in Paris from June 22 to June 23.

In more footwear news, the Game of Thrones x adidas SPEEDFACTORY AM4 sneakers have landed.

The Quai 54 Tournament celebrates its 15th Anniversary in 2019. Check out this Air Jordan 1 Mid set to drop this June! For a closer look, tap the link in our bio.