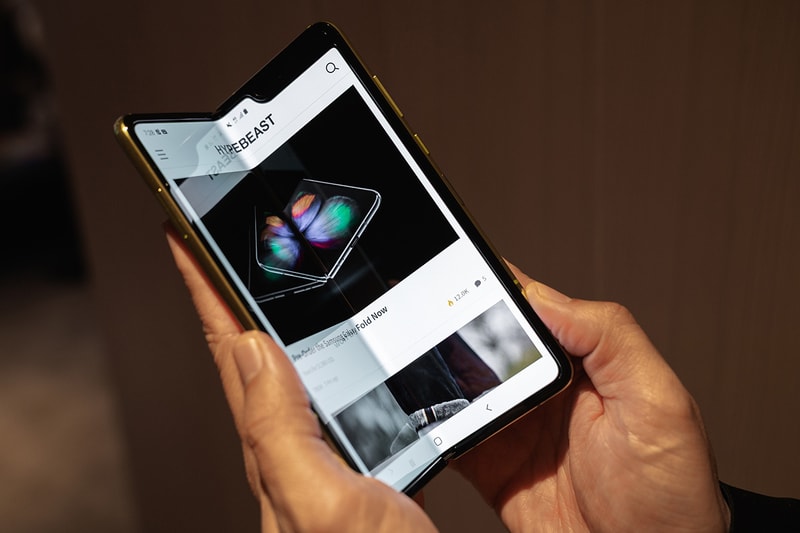 After receiving a four-minute in-depth look at the Samsung Galaxy Fold from the tech-monolith itself, we are now pleased to give you a closer look at the highly-anticipated device just ahead of its launch date.

Measuring in at 62.9 x 160.9 x 17mm, the large 7.3-inch QHD+ Dynamic AMOLED display folds eloquently in half, like a laptop, with a study folding mechanism that runs down the middle allowing users to easily carry the device in their pocket. A 20-part, dual axis hinge prevents the phone from bending in the wrong direction past 180 degrees and will be able to withstand over 200,000 folds and unfolds. Going through over 1,000 different prototypes, this final design took 10-years in the making.

Located on the right of the smartphone is the fingerprint sensor which also helps to launch Samsung’s smart assistant. Above, the power lock and volume keys can be found while the bottom of the phone contains a USB-C port on one half and a speaker on the other half. Following in suit with the new trend, there is no headphone jack.

The phone also boasts two speakers providing stereo sound tuned by Dolby Atmos-supported AKG and six cameras. Three of the cameras are located on the rear with a 12MP main sensor (f/1.5-f/2.4, OIS) joined by a 12MP telephoto lens (f/2.4, OIS) and a 16MP ultra-wide angle lens (f/2.2), while a 10MP (f/2.2) is located above the display. To more are revealed when the phone is opened up at the top right of the display.

Samsung‘s cutting-edge folding smartphone releases on April 26 in the US with a starting price point of $1,980 USD (approximately £1,800 GBP/€2,000 EUR). UK and Europe will have to wait until May 3, however pre-order will be also be available on April 26. Four colorways of the Galaxy Fold will release in "Space Silver," "Cosmos Black," "Martian Green" and "Astro Blue;" the green and blue variants will be exclusive to Samsung’s website.

The Samsung Galaxy Fold will become the most expensive smartphone on today’s market. Rivals Huawei is also set to release a similar foldable device dubbed Huawei Mate X sometime in the near future.