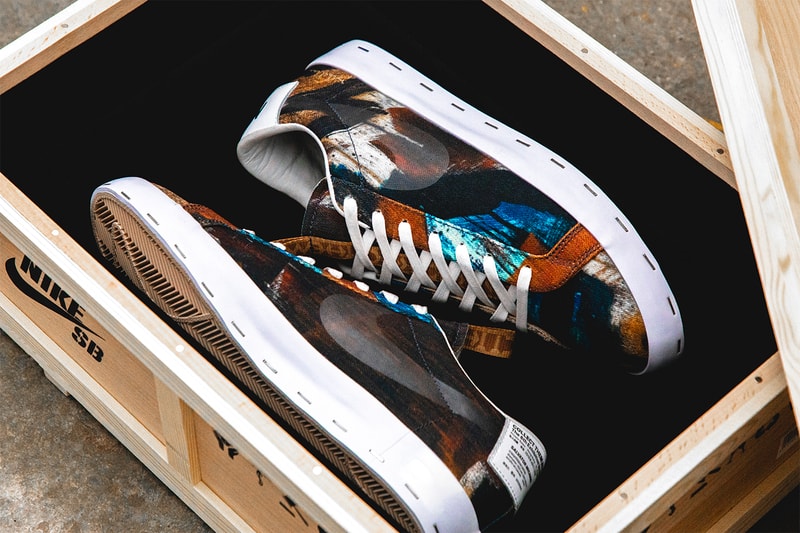 After getting a first look at Nike‘s forthcoming Nike SB Blazer Low “Salvator Michael” done in conjunction with Hong Kong artist Michael Lau, we now have a closer look at the highly-anticipated model.

The duo revisit their longstanding collaborative efforts, this time with the silhouette taking on inspiration from a character that is featured in Michael Lau’s "COLLECT THEM ALL!" exhibition, which is currently running in Shanghai, China. The sneaker’s upper has been crafted from differently cut canvas pieces to create a unique and eye-catching look. Additionally staples have been applied to midsole to mimic those found on a frame holding a painting. Finally these collaborative sneakers are housed in a wooden create, just like other works of art during shipping.

The Nike SB Blazer Low “Salvator Michael” is set to release this Sunday, August 18 on Nike.com alongside a launch event in Shanghai paying tribute to the late Sandy Bodecker. Nike has also stated that proceeds of the shoes will benefit China’s skateboarding community in the near future. In the meantime, visit Lau’s “COLLECT THEM ALL!” exhibition at Christie’s Shanghai location until September 12. The exhibition recently had a successful run in New York City.

For sneakers you can purchase now, Stranger Things and Nike head back to the "Upside Down" in this week’s best footwear drops.